Camera-envy used to be that ‘thing’ that long-lens-toting tourists would exhibit when parading around beauty spots, well-known tourist locations and perhaps even Disneyland.

That time has passed.

Due in some part to the global pandemic, but more widely due to the massive power of smartphone cameras… camera-envy and the whole ‘my lens is longer than yours’ playoff is no longer an issue out in the real world.

But a new age camera-envy is surfacing; now, in the age of online video collaboration via Zoom, Teams, Skype, Bluejeans and WebEx (other web call platforms are available) it starts to matter how you present your video presence and people are starting to take notice of their device camera quality and also invest in professional microphones and lighting.

Known for its keyboards, mice and other peripherals, Logitech’s biggest business channel is actually its webcam division.

As a prelude to the main story (coming shortly), Inspect-a-Gadget has been playing with a Logitech BRIO, the world’s first 4K Pro webcam with HDR. 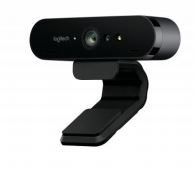 This unit has really impressive lighting technology called RightLight™ 3 with HDR, plus support for infrared-based facial recognition. We took a video call in January 2021 at 3.30 pm UK time just before dusk in a room with no lights on… despite the fact that the sun completely went down and the room turned dark, our image remained illuminated throughout.

The image quality is significantly advanced in terms of what you would get from your standard laptop camera and the company says that this is a ‘premium webcam’ suited for business users, streamers, YouTubers and other purists.

With support for Windows 7, Windows 8.1 or Windows 10 Mac OS X 10.7 or higher, we seriously thought “what’s the point? our laptop already has a webcam” – until we tried it. It’s very pleasing to be able to present yourself online in high resolution i.e. it makes it look like you’re taking the whole online presence element more seriously.

But the BRIO is just the taster… this story is actually focused on the even higher-end products from Logitech, the Logitech Rally Bar range.

The Logitech Rally Bar is purpose built for mid-size rooms and Logitech Rally Bar Mini is for small rooms. These products offers what is said to be ‘cinema-quality’ 4K video and crisp clear audio from ultra low distortion speakers, adaptive beamforming mic arrays and auto-levelling technology.

Plus, a patented anti-vibration suspension system minimizes speaker vibrations that can travel through walls, stands, and tables so you can hear and be heard with outstanding clarity.

In terms of AI, Logitech RightSense technology and AI viewfinder mean that this product has a second camera, just dedicated to computer vision. The camera detects human figures and processes where they are in real-time enhancing the precision of auto-framing and camera control so meeting participants are always in focus, whether they are late joining or moving about.

Rounding out large meeting rooms, the new Logitech RoomMate is a computing appliance that allows users to run video conferencing services on Logitech conference cams like Rally Plus without a PC or Mac.

“From ease of use and manageability, to bringing scale to businesses, we want to make products bigger and better, while reducing complexity. Our goal is to put video in every meeting space in the world. In order to do that, we need to make it easy, simple and cost-effective, which is what we believe we’ve achieved with this new portfolio of products.”

Users can run supported video conferencing applications natively on Rally Bar and Rally Bar Mini, like Microsoft Teams and Zoom, or connect them via USB to virtually any room PC or Mac. You can also BYOD (bring your own device), which allows you to plug in your laptop and run your chosen video service.

No more hey, who stole our HDMI cable

Rally Bar and Rally Bar Mini come with special cable management and flexible mounting options (the cables are tightly integrated so that ‘casual’ passers by can no longer easily detach and ‘borrow’ cables for pesonal use) for installs with minimal footprint.

Plus, get insights into how your conference rooms are being used with metrics like people count, especially important for room occupancy limits in the hybrid workplace.