April 2021 marks the start of the tech events calendar, starting with Red Hat Summit, which was held online for the second time since the onset of the pandemic. In this month’s recap on the top news and industry developments, we covered Red Hat’s efforts to capture a slice of the edge computing pie with enhancements in Red Hat Enterprise Linux and OpenShift.

To support edge applications which are increasingly being containerised, Red Hat OpenShift will support three-node clusters, making it possible to deploy the Kubernetes container orchestration platform in space- or resource-constrained locations. Red Hat is also looking to reduce this to single-node clusters which IBM is already using to facilitate scientific research at the International Space Station.

In other news, Intel has launched the third-generation Xeon server processor in Asia-Pacific, marking the chipmaker’s move to reclaim some of the mojo that it lost to AMD due to delays in its 10mn process manufacturing capability.

In this Loom video, check out our take on the Red Hat and Intel stories and more. Please tell us what you think in the comments and have a great week ahead. 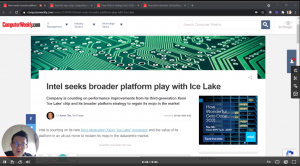