From Huawei’s Kirin 970 system-on-chip (SoC) that packs in a neural processing unit to Google’s new Edge TPU that performs machine learning tasks on IoT devices, the use of dedicated chips to speed up artificial intelligence (AI) tasks has been in vogue in recent years.

But not all chips are built the same way. Google’s Edge TPU, for instance, is a purpose-built ASIC (application-specific integrated circuit) processor designed to perform AI inferencing, while GPUs (graphics processing units) – a type of ASIC chip – are more apt at training AI models where massive parallel processing is used to run matrix multiplications.

Then there are also FGPAs (field programmable gate arrays) which can be programmed for different use cases but are typically less powerful than ASIC chips.

The choice of chips depends on the types of AI workloads. For image recognition and analysis, which typically involve high workloads with strict requirements on service quality, Alibaba claims that GPUs are unable to balance low latency and high performance requirements at the same time.

Alibaba said its DLP can support sparse convolution and low precision data computing at the same time, while a customised ISA (instruction set architecture) was defined to meet the requirements for flexibility and user experience.

Latency test results with Resnet18 – a convolutional neural network architecture – showed that Alibaba’s DLP has a delay of only 0.174ms.

Here’s a look at how Alibaba thinking behind its DLP design:

The DLP has four types of modules, classified based on their functions: 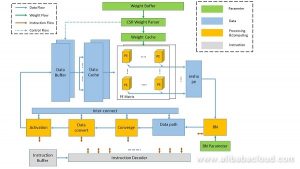 The Protocal Engine (PE) in the DLP can support:

Re-training is needed to develop an accurate model. There are four main steps illustrated below to achieve both sparse weight and low precision data feature map.

Alibaba used an effective method to train the Resnet18 model to sparse and low precision (1707.09870). The key component in its method is discretisation. It focused on compressing and accelerating deep models with network weights represented by very small numbers of bits, referred to as extremely low bit neural network. Then, it modeled this problem as a discretely constrained optimisation problem.

Borrowing the idea from Alternating Direction Method of Multipliers (ADMM), Alibaba decoupled the continuous parameters from the discrete constraints of the network, and cast the original hard problem into several sub-problems. Alibaba solved these sub-problems using extragradient and iterative quantisation algorithms, which led to considerably faster convergence compared to conventional optimisation methods.

Extensive experiments on image recognition and object detection showed that Alibaba’s algorithm is more effective than other approaches when working with extremely low bit neural network.

Having low latency is not enough for most online services and usage scenarios since the algorithm model changes frequently. As FPGA development can take weeks or months, Alibaba designed an industry standard architecture (ISA) and compiler to reduce model upgrade time to just a few minutes. 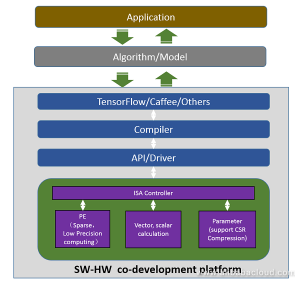 The DLP was implemented on an Alibaba-designed FPGA card, which has PCIe and DDR4 memory. The DLP, combined with this FPGA card, can benefit applications such as online image searches. 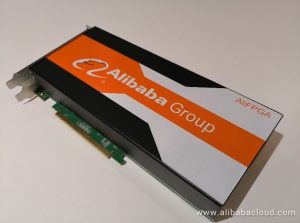 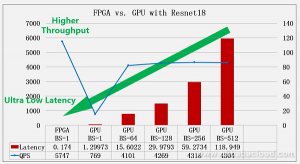