Afternoon sessions at this year’s SAP TechEd Europe 2018 in Barcelona opened up the opportunity to speak to Thomas Grassl, SAP’s global head for developer and community relations.

The Computer Weekly Developer Network sat with SAP’s developer lead to quiz him on what he thinks it really takes to engage with developers successfully in 2018?

The below text is presented as Grassl’s own words.

What makes a difference right now is that a developer programme should be able to deliver content, teaching and code that really matters to the individual developer.

Developers always refer to themselves as ‘problem solvers’ so it’s important to be able to show each and every one of them what SAP will offers (in terms of any given toolset or part of the platform) that will actually solve a problem.

We also learn from the developers themselves. Earlier this year we put the SAP developer organisation and the SAP community under one umbrella — really because it was such a similar audience. These are the practitioners…  really we do see the sysadmins and developers needing similar things, so it’s very much in the DevOps field.

SAP works hard to look for ways to uncover individuals’ opportunities depending on their individuals skills – so if you’re not a Java developer, but you have a technical process background (and you know workflow and business rules etc.), we still have lots of ways that these people can use the SAP platform.

Low down on low code

Yes you could say there is an impact from the amount of ‘low code’ technologies out there now and we do build an awareness of that into the way we work with programmers – SAP has a partnership with [low code company] Mendix in that regard.

With specific regard to ABAP [a 4GL language built by SAP originally in 1983], the most important thing is that we are bringing ABAP to the SAP Cloud Platform, so developers who are proficient with ABAP can now take their skills from the on premises world to the wider world of the cloud and start using so many more services.

Of course cloud is a bigger world, so we’re working to produce ‘targeted learning’ to make sure these coders can make that transition to ABAP in the cloud successfully.

Obviously we look outside of the SAP and ABAP to really encompass ‘all’ languages and we know that some developers need more and sometimes less guidance (some want to use their own frameworks — and, conversely, some want help with how to build the data model, how to build process logic and how to build UI constructs)… so we need to be able to be ultimately flexible for every use case, for every developer’s preferences and every developer’s skill set.

Developers.sap.com contains a lot of tutorials and some fairly deep dive content, but you can also approach this portal as a novice. I would also emphasise that we don’t bombard users with all the SAP products here, there is some good high level content to digest.

We also host a hackathon at most SAP events throughout the year – and to dovetail with those, we also have these ‘app spaces’ where we have developer evangelists working to present pre-prepared topics so that users can come up and tune some live skills at the shows themselves.

Overall, SAP may not always be thought of as a developer company, but really I have to stress that all business applications require developers to build them… and we have a community of around 2.8 million coders worldwide. 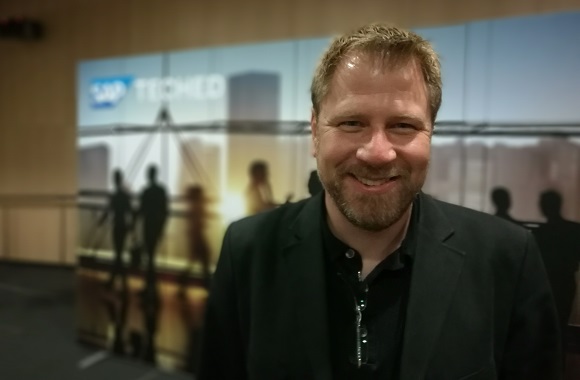