For a company known to many for its microprocessor hardware and chipset prowess, Intel has always had one of the most better technical conference programmes around.

Intel Developer Forum (IDF) has arguably/possibly always been something of a mainstay in the programmer’s year.

In the current era where no firm conference bookings ever happen, the company has staged its inaugural Intel Innovation event, where it claims to have ‘returned to its developer roots’ with a commitment to the community and a developer-first approach across software and hardware.

We of course know Intel’s software-centric technology proposition to revolve around a crux of efficiencies and architectural engineering advantages brought about through parallelism, concurrency and threading i.e. where application execution can be channeled into streams for more efficient processing based upon the logical separation of software tasks inside the program or system in hand.

“As the creator of the original Intel Developer Forum, it’s a great honour to once again bring together people from across the ecosystem to explore the future of technology. Developers are the true superheroes of the digitized world – a world underpinned by semiconductors. We will not rest until we’ve exhausted the periodic table, unlocking the magic of silicon and empowering developers,” said Intel CEO Pat Gelsinger, or at least his communications function did.

All are intended to improve access to resources and simplify development across central processing unit (CPU) and accelerator architectures:

To improve ease of access to reference designs, toolkits and other assets across AI, client, cloud, 5G/edge and gaming, the new resource provides developers with access to a consolidated Intel Developer Catalog of key Intel software offerings, as well as an improved Intel DevCloud development environment to test and run workloads on a variety of Intel’s latest hardware (CPUs, graphics processing units (GPUs), field programmable gate arrays (FPGAs) and accelerators) and software tools.

Intel is preparing to ship oneAPI 2022 toolkits with 900 new features since it shipped last year.

Intel suggests that we think about how computing is spreading across what it calls ‘heterogeneous fabrics’ of CPUs, GPUs, application accelerators, interconnect processors, edge-computing devices and FPGAs – all of which require persistent memory and software to bind these elements into a complete solution.

The race to zettascale is on

“The race to zettascale is on to generate, store and analyse data at scale. It took over 12 years to get from petascale to exascale computing. Intel has challenged itself to make it to zetta in five years: zetta 2027.  Central to this goal is Intel’s work with the open ecosystem to ensure developers have optimized tools and software environments to accelerate their deployments,” said the company, in a press statement.

As nicely explained here on the Next Platform, “Zettascale means zettaflops — more precisely, it means 64-bit precision zettaflops and not doing any funny reduced precision counting, or retooling of the applications into lower precision and saying it behaves like a machine with 1,000 exaflops at 64-bits.” 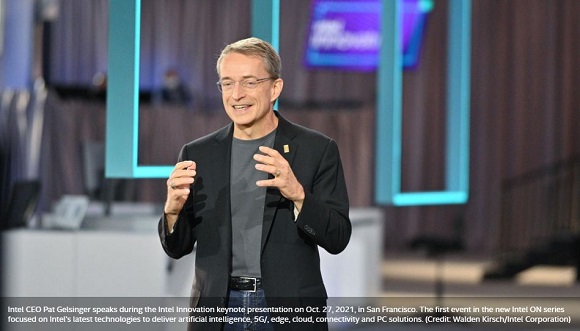