Somewhere between CP/M, IBM BIOS and Windows 3.0, Bill Gates went to a meeting with IBM in order to try and formulate a different agreement between the two companies, who were already working together on OS bundling.

Schwartz noted that IBM declined an offer to own Windows in its entirety, a move that (in the short and long term) would have been a good idea by anybody’s yardstick. Of course, back in the day, IBM’s board was a panel of besuited males, most of whom sported a golfing habit and Ivy League alumni status.

“Now I’m not saying that IBM would have snapped up Windows if there had been just ONE female on the board, but if you want an argument for diversity in technology, then you can probably start right there,” said Schwartz, when speaking at the UAE World Government Summit a couple of years back.

Have we learned our lesson then? By and large, it appears not, according to Ivana Bartoletti, who works, writes and speaks on privacy and digital ethics in the UK and globally in addition to her role as chair of the executive committee of the Fabian Society.

“Tech is not neutral – artefacts mirror the values and aims of those creating them (too often men)… and data is not neutral with data collection being in itself an expression of power,” said Bartoletti.

Her comments come in the wake of software application developers, cloud architects, systems engineers and data scientists who are now working to try and create solutions to the COVID-19 (Coronavirus) pandemic with ever-smarter software that makes use of Artificial Intelligence (AI) and Machine Learning (ML).

For Bartoletti’s money, the work these software professionals do today in reaction to COVID-19 will define the world tomorrow.

“[… and the issue is that] right now, that response is built on the trends of surveillance, punishment, datafication and technosolutionism. These trends underpin our digital world – and we must reverse them by putting people and ideas at the heart of tech,” said Bartoletti.

Insisting that she loves technology and that this is no case of technophobia, Bartoletti explains that we are at watershed moment in terms of the development of software application development in this space.

“Countries around the world are ratcheting surveillance, partnering up with big technology and using the crisis to erode democracy. We must recognise the scale of the challenge and see data for what it is – capital.  Alongside the physical environment, this is the political issue of our time,” she said.

In response then, Bartoletti says she is calling for global governance of AI to be taken as seriously as the global governance of nuclear power. Her book An Artificial Revolution is an analysis of the current AI landscape, its potential and its pitfalls. It is also a feminist book (remember where this story started), so one can only hope that males and others across the gender spectrum start to realise that feminism isn’t about females… it’s about equality.

Data is the new capital

“Data is capital and behaves as such – accumulation, inequality, asymmetry and imbalance of power, colonialism, and patriarchy.  Data is also changing power dynamics at a global level, with accumulation and data extraction from data rich / finance poor countries,” said Bartoletti.

She concludes with an additional message for data-developers in the AI arena by saying that AI is capable of potential benefit but also carries enormous risks. Not one to shirk away from strong opinions, Bartoletti contends that we are tricked into thinking that a more diverse workforce in programming will help solve the problem of tech inequalities.

“The truth is that we need more diversity at the top of businesses and politics.  More diversity where the rules are decided, not just in the coding room,” she concluded.

There is a fiery element in this discussion and some people will be uncomfortable with elements of it… but that just might be the point.

Where do you want to go tomorrow? 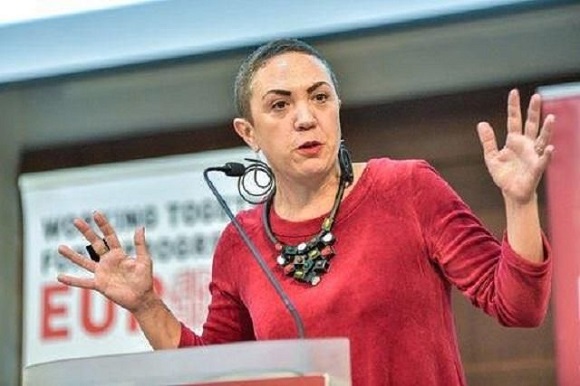 Bartoletti: It’s time for IT diversity, at every level.