Appian founder and CEO Matt Calkins hosted an opening keynote by referencing his firm’s year in review, which included an IPO and a variety of functionality updates to the core Appian platform which now runs (what Calkins claimed to be) ‘thousands’ of applications.

“It’s our goal to keep getting faster and our commitment rests on getting better at this aspect of our platform. We aren’t focused on the competition, we’re just following the star that leads to what the customers want to do with our product. We’re not trying to open up a lead, we’re trying to unlock an entire market,” said Calkins, in his keynote address.

Calkins says that Appian is focused on making it much easier for more types of users to create applications. He thinks that if we do this, we can create a new renaissance in terms of the way software is applied to our everyday lives — and, crucially, it will enable organisations to operate differently.

“Every year we want to cut in half the amount of work it takes to build an application, it’s our take on a kind of Moore’s Law objective,” said Calkins.

In terms of how it cuts down application construction timing, Calkins has explained how Appian is focused on working on the aspects of application build that require the most scripting. A key part of this will be making GUI construction much faster.

Other areas for the future will include integration tasks, which may still include more scripting than Appian would ultimately like to deliver. The objective Calkins has is to be able to offload certain aspects of these kinds of tasks so that they can be handled by a Robotic Process Automation (RPA) bot or a software algorithm.

There will also be a big chunk of new Artificial Intelligence for sentiment analysis.

“Our tool will look at any text string in real time and be able to render to the user (in real time) how happy a customer is. It will also tell you which customer representative is doing the best job and this will all be bundled into Appian now at no extra charge,” said Calkins.

“We have even developed a new logo to show that AI is part of Appian — so hey, we’ve developed a logo, that way you know we’re serious,” joked Calkins.

RPA itself will also be part of the road ahead. But in this case it is focused on orchestration tasks. This is related to what Calkins has noted as ‘bi-directional passage of complex data types’ — technology that can be used to build RPA into more diverse teams that feature both humans and robot functions.

“We’re trying to raise the profile of low code so that people realise it’s all about building applications that need less code. If more attention does come to this term, then I want people to understand more about what it really means — this does not mean that the ‘thing’ you are creating is in any way less sophisticated,” said Calkins. “Low code should be used ABOVE ALL to create more sophisticated software because that’s the software that is taking the longest to build.”

What Appian wants to do with low code is for its apps to be able to hosted anywhere, to run anywhere and to work with data anywhere. Calkins went a little more corporate at this point and spent some time talking about SLAs and reliability, so let’s take enterprise backslapping platitudes as read.

Looking more closely at architectural developments, Appian explains that it is working to facilitate access to information that may reside in multiple places.

What’s it like listening to the Appian CEO? That’s a tough question to answer — this is a technical guy, talking a mixture of comparatively technical algorithm-related content mixed with corporate positioning, working to build a (comparatively) non-technical technical software platform.

But that’s Appian in a nutshell isn’t it? It’s exposure to low level software engine technology in as high level (as in human centric) a format as possible. 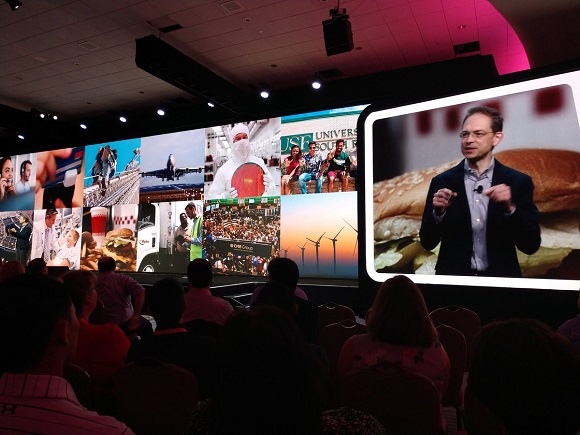