Research company AppNation has put forward estimates for the size of the “applications market” going forward to 2017.

The research firm’s first State of the App Economy Report, which was produced in partnership with Reticle Research, suggests (unsurprisingly) that email, web browsers and social networks lead our global applications usage frequency.

“The largest contributor to this number will be app-enabled commerce, supplemented by forecasted revenue from downloads, in-advertising and virtual goods,” said the firm.

NOTE: Viral spread of application popularity by word of mouth will remain “by far” the most popular way that consumers say they discover apps says AppNation.

The number of apps used per day and time spent on mobile devices by consumers is still expanding says AppNation founder and CEO, Drew Ianni. 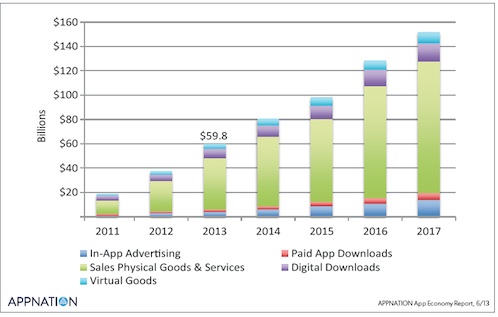 The report itself is US based, but its trends appear global in nature — or at least relevant to the UK market i.e. while smartphones and tablets are driving the app economy, emerging platforms such as connected cars and smart TVs on the rise.

The question now is, how will these emerging platforms interface and integrate with the apps that consumers and business users already have?