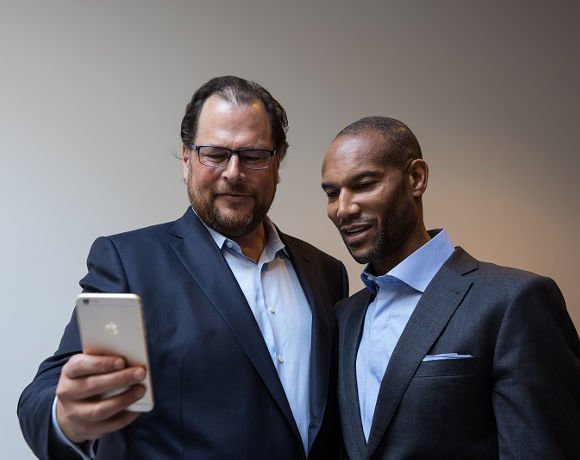 Corporate vice-president of Windows marketing at Microsoft Tony Prophet staged what was labelled as a "fireside chat" with Salesforce.com CEO Marc Benioff. The chat consisted of two industry executives warmly congratulating each other’s leadership teams and product development roadmaps. Prophet was mercifully spared the need to comment on his own CEO's recent gaffs made only days before on the subject of women’s pay.

The Microsoft vice-president appeared nervy and over-rehearsed from start to finish, quickly glossing over the re-introduction of the Start button in the forthcoming Windows 10 operating system, saying it was "just a small thing", but an important one. Prophet did get down to some specifics and said Windows 9 "just came and went" as the firm now tries to build Windows 10 as one platform for all devices, from tablets, PCs and phones onwards to the internet of things.

Just for the cameras, Benioff’s press team magically managed to capture a picture of him with Microsoft’s Prophet taking a selfie using an Apple iPhone.