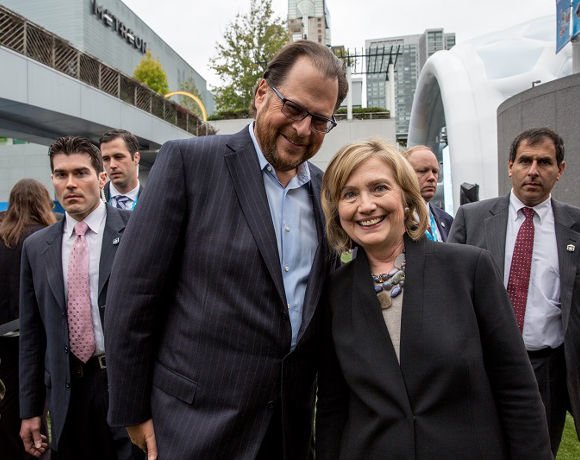 Salesforce.com CEO Marc Benioff has invested heavily in the welfare of his home city of San Francisco. A charitable foundation, a children’s hospital and a string of other public service-related philanthropic programmes all carry his name. This endears Benioff to not only city mayor Ed Lee, who made a number of appearances at Dreamforce 2014, but US House of Representatives minority leader Nancy Pelosi, who was also present.

Trumping them all was former secretary of state and former first lady Hillary Rodham Clinton who delivered a speech that drew standing ovations throughout.

Clinton spoke of her new granddaughter, her understanding of net neutrality and of her interests in children’s education and technology. She also detailed her work with the University of California, San Francisco (UCSF) Benioff Children’s Hospital on a programme entitled Too Small to Fail, which encourages reading and communicating with children from the point of their birth.

On net neutrality, Clinton said: "Ethics are as important as electronics. Corporate responsibility is highly prized. That's a model not just for this industry, but the world."