Why do we persist in running vertically integrated organisations when standardising many of these processes would free us up to do things so much better, and more cheaply? Mark Thompson with Jerry Fishenden, based on work being undertaken with Cambridge University’s Open Platforms and Innovation Group, continue to address this question in this fourth instalment of their series of articles for the private and public sectors alike. Read the first instalment here, the second here, and the third here.

Previously in The Great Deverticalisation…

The shopkeepers in the Street began to realise that maintaining their bespoke appliances had become so burdensome and expensive that they had no time left over to serve their customers.

When they visited Market City, they discovered the Market City shopkeepers had created a common platform built on open standards that allowed them to have their cake and eat it: cheap, locally-tailored appliances, each easy to assemble and run, with a crowd of suppliers vying with one another to think of ever cleverer, more innovative ideas to make them even better.

When they returned to the Street, the shopkeepers started to design services to meet their users’ needs – as simply and cheaply as possible, using open standards and re-using many commodity elements that already existed.

For the first time, some of the shopkeepers began to see how the Street could be both much more effective at serving their users, as well as being much less expensive to run. But if all of this was going to work then it was not only the shopkeepers in the Street who needed to learn and change, but also their suppliers.

… and so our story continues

It was clear to the shopkeepers in the Street that their traditional suppliers, the van people, did not understand what was happening. They were living in the past, trying to hold on to a way of thinking that had already started to look like a stuffed dodo in a dusty museum display case in the late 1990s.

Some of the shopkeepers decided to look elsewhere. “We need to find people who know how to do this. We don’t need the ‘special services’ of our van people,” they said. “This isn’t about the needs of the Street being ‘special’, but how we take advantage of what is happening in Market City. Some of the van people seem to have little experience of the world that exists outside.”

These forward-thinking shopkeepers found useful guidance in the writings of a certain Mr Tim O’Reilly, Esquire from the former overseas colonies. He had observed many developments in the real world outside the bubble of the van people and his ideas were particularly relevant to the Street and the essential services it provided to its users:

We are moving to an open architecture using open standards. We will do the architecture and aggregate the demand for standard stuff; UK plc will innovate around this platform, invest, and provide services to be available to our users when and where they need them. And to be frank, we don’t really see where some of you play a role in all of this unless you’re prepared to change radically

“The idea that we have to choose between government providing services to citizens and leaving everything to the private sector is a false dichotomy. Tim Berners-Lee didn’t develop hundreds of millions of websites; Google didn’t develop thousands of Google Maps mashups; Apple developed only a few of the tens of thousands of applications for the iPhone,” write O’Reilly in his paper, Government as a platform.

Stepping into the cloud

The shopkeepers were already making good progress. Their first step had been to separate their user needs into interoperable components with the ability to modify or add a specific element rather than rewriting everything, providing a much-needed flexibility to meet changing demands upon their services.

Their second step was now to make use of cloud and other utility services – rather than purchasing expensive and often little-used infrastructure. This way they would be able to tap into “elastic computing” services that scaled on demand to provide the capacity required, and operating on a pay-as-you-go basis rather than the monthly ransom fee from their van people.

Instead of “bespoking” everything themselves, the Street would be able to use standard, already-existing services and offerings from the private sector. Indeed, the respective roles of public and private sectors would now become increasingly clear. By putting its weight into generating volume demand for standard stuff, the Street would itself become a platform - the sheer demand for stuff made using open standards would stimulate innovation and investment.

Instead of building and delivering bespoke services itself (aided by the van people), from now on the Street’s job would be simply to kick-start and maintain this open platform - innovating and investing around this platform would be everyone else’s job. Indeed, the Street would no more be able to do the innovation and investment part than Tim Berners-Lee would have been able to develop hundreds of millions of websites, or Google to develop all the apps for Android. Whereas the Street and the van people had been operating a closed economy, this platform thinking would unleash the constant innovation power of “open”.

By encouraging the development of cheap, commodity platforms, the Street would incentivise a broad range of private sector suppliers and innovators to build applications, share public data, and purchase services in a way that let it crowdsource ideas and then cherrypick and invest in the best of these. The resulting continually emergent, innovative dynamic would be very different from the bloated fixed supply contract owned by one, or a small handful of, van people. 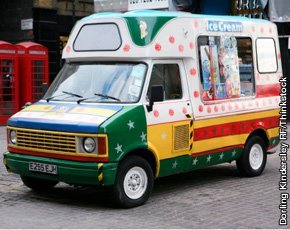 The van people get agitated

Meanwhile some of the van people were becoming very agitated by what was happening. They insisted on another urgent meeting with the shopkeepers in the Street.

“Look,” the van people said, pointing at their vans parked outside, which they had sprayed in different colours. “See, we can change, and quickly too. Aren’t they so pretty?”

The shopkeepers frowned and drummed their fingers with irritation, but the van people didn’t seem to notice.

“And,” continued the van people, almost breathless with excitement at their own astonishing levels of innovation. “This is just the start. In return for changing the colour of our vans, and for also changing the badges on all the appliances we have hand-built for you – so that they say “platform services” instead of “bespoke stuff” – we will charge you only 30% more. Bazinga!”

But instead of the shopkeepers rolling over and doing as the van people wanted, as they had always done in the past, instead some of them now said: “We are moving to an open architecture using open standards. We will do the architecture and aggregate the demand for standard stuff; UK plc will innovate around this platform, invest, and provide services to be available to our users when and where they need them. And to be frank, we don’t really see where some of you play a role in all of this unless you’re prepared to change radically.”

The van people sat with their jaws on the floor, alongside their fat wallets which were already beginning to look a little ragged around the edges.

But other suppliers – large and small - were very excited that the Street was making these changes. The question as to who could best design and deliver simpler, utility-based services would increasingly be determined by commercial incentives, not single-supplier lock-in – meaning that many more people could now compete to provide these services.

It was only some of the van people who were unhappy with all these changes, as well as some of the shopkeepers in the Street, who had proven resistant to this new way of thinking and had been more comfortable seeking the cosy reassurances of – and in some cases even jobs from - the van people.

Their fully expensed lunches – sorry – their way of life, the one which they had known and loved for many years, was coming to an end. The dis-integration of tightly integrated, proprietary systems and processes traditionally organised around the supplier and service provider – and their re-aggregation, in the form of services, around the user in such a way as to take advantage of the utility economics of a rapidly-evolving services marketplace – was about to change their careers and businesses for ever.

“And not before time,” smiled both the innovative shopkeepers from the Street and the wider private sector providers.

Whatever the van people might think as they wandered around their freshly painted vans kicking idly at the tyres, these changes were going to provide an essential incentive for private sector investment, acting as a catalyst of economic growth and regeneration, and redefining the roles of both the Street and Market City alike, to the benefit of both.

Next - in the final episode, Part 5: Deverticalisation – Making the UK Competitive Again.