VMware’s all-singing, all dancing, EVO:RAIL hasn’t really lived up to the high expectations that were set at VMworld 2014. 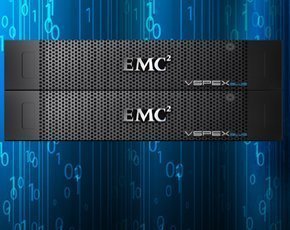 The majority of dissatisfaction seems to be centred on a lack of features and flexibility that the hyper-converged appliance offers. When compared to it’s big brother – EVO:RACK, EVO:RAIL looks somewhat lobotomised. The price has also been a sticking point, with plenty of cheaper alternatives on the market.

Then there was Licensegate. Customers that already had Enterprise License Agreements in place with VMware were effectively being asked to pay for an entirely new vSphere license with their bundled appliance. The kick back was fierce.

On top of all of this, last month Hewlett Packard confirmed that it was dropping its EVO:RAIL appliance. HP was one of seven global partners approved to package VMware’s appliance, so the news that it is discontinuing its ConvergedSystem 200-HC system is a significant blow to the reference architecture’s future.

So what do you do when the odds seem stacked against you? Well, if you’re VMware - you double down. The virtual titan is not backing out of this fight. It has a clear vision of where the market is going and to VMware’s credit, it is listening to feedback from customers and partners and taking steps to address concerns.

On top of this, the vendor will launch an all-flash version of the appliance later this year, significantly boosting performance.

To address the licensing mishap, VMware has launched the vSphere Loyalty Programme, which offers a discount on the EVO:RAIL appliance, effectively negating the cost that is re-buying licences.

MicroScope recently caught with Phil Croxford, director of the UK Partner Organisation at VMware, to get his take on EVO:RAIL’s impact on the channel.

“EVO:RAIL is a key initiative for us at the moment as it fits in really well with our software defined data strategy,” Croxford explained. “Appliances are gaining a lot of traction in the market at the moment and the opportunity for hyper-converged is just massive.”

The director didn’t seem phased by the slow uptake of VMware’s hyper-converged appliance, but instead said it was down the immaturity of the market.

“Hyper-converged is a new concept for everyone. We are all fairly familiar with converged infrastructure now. VCE have effectively created a market there; but I think it's taking some time for the hyper converged message to gain traction.”

“We've made a number of sales,” Croxford said, although he was careful not to divulge exactly what that number was. “And we are working on our first UK reference, which is a public sector customer. We have seen significant interest from our partner community as well as our customer base.”

“We are seeing use cases driven by test and dev environments, which are not necessarily going straight into production. I think we'll see a significant ramp up as the technology gains a bit more traction.”

If your business is based purely on installing and configuring hardware, you really have to take a long hard look at your strategy

“You've got those who say: ‘Hang on a minute, that's taking away all of my install and config revenue’, but if your business is based purely on installing and configuring hardware, you really have to take a long hard look at your strategy. This is happening in the marketplace; you can either fold your arms, stick your fingers in ears, ignore it and have all your competitors embrace it, or you can embrace it yourself,” said the UK channel boss.

Croxford believes that despite the ease of use that hyper-converged offers to end-users, the process of pushing and supporting the boxes demands a whole new set of skills from partners.

“These products are more complex to sell. They actually need selling rather than orders simply being taken. They also need some pretty complex services skills to be able to implement the product and manage the business transformation around delivery. These appliances are essentially defining a customer’s data centre strategy; there's a whole journey for the customer to go on, so they need business transformation partners to work with,” Croxford explained.

“We are seeing a real shift in the partners that are relevant and important to us, much more towards those services led and business transformation partners that can take customers on that journey.”

The channel chief admits that VMware needs to improve in certain areas to help make its vision a reality for its partner community.

Croxford is well aware that becoming a dominant force hyper-converged marketplace is not going to be a walk in the park. The likes of Nutanix, SimpliVity and Maxta have already ensured that VMware won’t gain the same kind of stranglehold that it holds on compute virtualisation.

“We are having to compete at the end of the day, but we are now competing in multiple markets so we're not a one trick pony,” Croxford said. “We also have a massive customer base, and they have all bought into virtualisation. If you are going to virtualise your network and storage, then it seems natural to go to the organisation that virtualised your compute.”

“Yes, we will be competing with a lot more organisations in the space, but I think the fact that we have a completeness of vision, the fact that we can virtualise all of the tiers, and that we can offer the choice between public and private cloud – all this means that we are positioned in a very strong place. It's probably unrealistic to expect the same levels of market share that we have with virtualisation, but in terms of being able to offer a complete software defined data centre solution, I think we are one of the few organisations that can really offer that.”

VMware was decidedly late to the hyper-converged party and nearly a year in, it’s difficult to say that the firm hit the ground running. But it finally seems to be making up for lost time.

While its channel-only distribution model is necessary due to the fact that VMware doesn’t do hardware, it has undoubtedly slowed the rate of progress down. Approved partners have taken varying amounts of time to figure out where their value-add lies and so it is difficult to gauge just how well EVO:RAIL is really doing.

Over the course of the next 12 months, the veil of mystery should lift slightly and we will begin to understand EVO:RAIL’s impact on the market.