People like to think that the way IT works with business has changed dramatically in the past 13 years, but have the important challenges faced back then really been addressed? This week, we look back at a 2008/2009 survey of nearly 500 IT professionals to see how IT investment strategies have changed. In particular, has the fit between IT systems and business needs improved today, and if so, by how much?

As our contribution to the bit of fun that is Throwback Thursday, we’re taking an occasional stroll in the Freeform Dynamics archives. 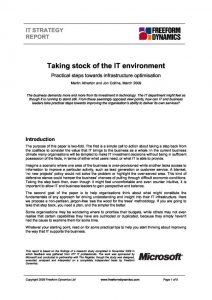 Businesses have always sought to ensure that their IT systems provide good value for money. Until the turn of the millennium, measuring the value of IT investments was relatively straightforward, as most IT Infrastructure acquisitions were made to run a single application.

But as the 21st century opened, IT systems became much more flexible, largely thanks to the wide-spread adoption of virtualisation. The ability to move virtual machines (VMs) around, and to have a single server/storage solution run multiple applications, added a new dimension to value calculations. If one system supported multiple applications, how could this fluid architecture be optimised yet still meet service level requirements?

How the headaches and challenges escalated

This was an intriguing and often very political question to answer, but some fundamental headaches and challenges remained. Back then these consisted of managing superfluous information, supporting end users, and securing the devices and data they use as well as securing the core systems themselves. Beyond this the survey found that reporting IT performance to the business was a notable headache, as was optimising the utilisation of the IT infrastructure. Naturally, cost control was also part of the picture.

While only the first of these was reported by more 50% of respondents, more than half of organisations of all sizes with more than 10 staff mentioned at least five challenges or headaches.

The report essentially found that most IT departments were good, or even very good, at some things, but were less good at others. The net result? Headaches caused by IT complexity were common, and of course many of these still exist today. Indeed, some will have worsened, given that the overall IT environment is even more complex once you add in the use of public cloud systems with their different charging models, the growth of SaaS applications, and the interconnection of many IT systems using APIs.

The more things change, the more they stay….

This common thread running through all the changes of the last 12 or 13 years makes the final conclusion of the report as apt today as it was then: “Even when things are looking uncertain however, ‘now’ is always the best time to get a clear view of what is expected of IT, how well it is delivering against such expectations and what should be done to improve things. Nobody knows where things are going in the future, but those who understand where they are will be far better placed for success.”

So the key questions are what do you have, who is using it, and for which business purposes? Answer these, and then you can begin to look at where things can be changed to make best use of the IT resources you have. Don’t forget the people part of the resources equation as well.