This week I look at a report we produced back in August 2006, the subject of which was Delivering Effective IT Support. I was intrigued to see how much has changed over the past decade and a half – and perhaps more importantly, to see what hasn’t changed so much. 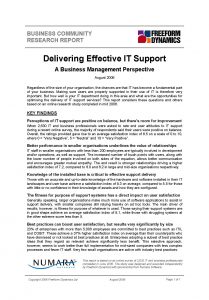 The first thing that caught my eye was one of the headline results from the key findings on the front page. On a scale of 0, very negative, to 10, very positive, the survey showed that most respondents were only marginally happy with the support they received, with the average coming in at just 6.5/10 for satisfaction. Interestingly, those working in smaller companies were overall more satisfied than their peers working for larger enterprises.

Given the conversations I have today, I wonder if the numbers would be very different if we ran a survey now. While the quality of IT support has almost certainly improved, due to having better service-desk tools and IT asset information available, my suspicion is that user expectations of service support have also ramped up.

After all, how often do you hear people say what a great job support teams do? It’s a simple reflection of the fact that most contact happens when the user has problems, not when things are going smoothly.

Another result that leapt out was that respondents were far more likely to be happy with IT support when it was run in-house than when it was outsourced. Putting these two elements together makes me very interested to find out how much modern IT support tools, self-service and the extra 15 years of experience and generation of, hopefully, good practice, has improved the image of the service desk.

Indeed, we now have the ability to automate many self-service elements, and to use machine learning in end user IT problem solving. That should have had a significant impact on end user satisfaction and their ability to work effectively.

The big question is, are there observable correlations between good – or even great – service-desk satisfaction and measurable business benefits. Intellectually, the connection seems clear, at least to me, but is the proof out there?