If there’s one thing that our report Storage Anywhere and Everywhere from eight years ago reminds us, it’s that the risks of uncontrolled data growth are nothing new.

As our contribution to the bit of fun that is Throwback Thursday, we’re taking a regular stroll in the Freeform Dynamics archives.

So what’s changed in the intervening years, and is the message from 2013 still valid? To answer the first question, nothing – but also everything! – and to answer the second, absolutely. All the challenges and opportunities we highlighted back then are still present, except that today we have better technology and processes to deal with them.

Is it fragmentation, or sprawl?

In 2013 our respondents’ big worry was data fragmentation – the way that PCs, mobile devices and cloud services were being used to store valuable, but now physically siloed, company data. Today we talk of data sprawl, rather than data fragmentation, but much of the time what we actually mean is service sprawl. 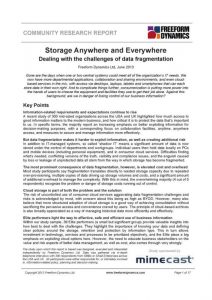 Your data is still fragmented, of course, but now it’s across multiple physical, virtual or logical storage spaces, rather than only physical locations. That’s because we’re making more and more use of cloud storage, SaaS applications and other online services – in past research studies we’ve found some organisations reporting that they used more than 20 such services.

But while the scale of the problem has changed, it still brings the same kinds of challenges that we identified back in 2013, meaning that if you need to understand the problems and risks then this paper remains a useful primer.

For example, the inability to access data reduces its business value. Data duplication, wasted capacity and heightened complexity all add unnecessary cost. And sensitive and/or valuable data may go unprotected, be lost or stolen, or simply be hard to find when it’s needed for legal or regulatory reasons.

So what’s changed? One word: archiving

The key lessons and opportunities haven’t changed so much either. In particular, the difference between distributed data and fragmented data remains the same: if your data management and governance is good enough you have the former, and if it’s not you have the latter!

One area where you can say there’s been significant change is archiving. In 2013 we wrote of the perceptions that archiving was “more trouble than it’s worth,” and that “that historical data needs to stay in the live environment to remain accessible.”

Since then, the ongoing developments in both storage media and archiving/storage software have dramatically changed the archiving landscape. Hybrid storage, combining disk, tape, SSD and cloud, has converged with automated and policy-based indexing, categorisation and data migration to make active archiving a real opportunity, on-site as well as online.

For a refresher on the state of storage sprawl, plus the chance to assess your own performance on reining it in – and learn from the experts, if need be – you can download the paper here.