Matrix is an open network for decentralised communication.

The brand has now surpassed sixty-million users worldwide after experiencing 71% growth in the last 12 months.

All Matrix-based apps are natively interoperable and its developers claim to have produced a means of offering secure communication that is free from data mining.

Matrix’s flagship app Element is messaging and collaboration platform that works as a (free) privacy-respecting replacement for the likes of WhatsApp.

As reported here on Forbes, “WhatsApp’s privacy label is awful. It’s the only leading secure messenger that harvests ‘data linked to you’, including your device ID, for ‘developer’s advertising and marketing’. It also collects your contact info, user ID and device ID for ominously vague ‘other purposes’. Other messengers collect your data to tailor functionality. WhatsApp is harvesting it for other reasons.”

According to Matrix, Telegram is also less secure than Element.

All of this meanwhile… and the US, UK, French and German governments use paid-for enterprise versions of Element for secure communications, along with many of large companies.

Why has Element done (what appears to be) well? Because (it says) it champions each party’s data sovereignty.

We can look for evidence in the form of Gitter’s integration with Matrix and see that now, open source collaboration app Rocket.Chat is allowing federation with Matrix. This will see Rocket.Chat’s tens of millions of users having the option to natively interoperate with the wider Matrix network.

“Element is one of many Matrix-based providers,” says Amandine Le Pape, Element co-founder and COO. “Our rapid growth shows that enterprises and the public sector are realising that email and traditional collaboration tools are simply not secure by modern standards and are restrictive in terms of data ownership and interoperability. Element builds on all the benefits of Matrix, with a flexible enterprise-ready platform on top.”

The EU’s Digital Market Act shows the importance of a wider choice – and more interoperability between – messaging apps.

Matrix co-founder and CEO Matthew Hodgson has said that Matrix’s new milestone, surpassing 60 million users, is a sign that users don’t want to be subjected to advertising-funded messaging apps that data-mine their information.

“A decentralised open standard is the most sensible and viable way forward for communications, in the same way that http underpins the web. It empowers users and providers with interoperability, security and data ownership. All parties have their own control and choice,” said Hodgson. 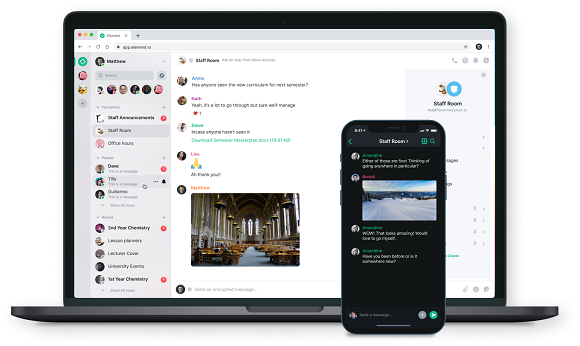