Back in the day (and we’re talking when Windows 95 was big news), we used to sit around in software vendor Proof-of-Concept labs looking at what should be physically possible given the current state of computing.

Please remember, this was 1995, so we’re pre-dating even D-HTML by two years (it arrived in 1997), so even the web itself was a pretty static place to be.

In-between bouts of the original version of Doom or Quake and the occasional interlude when serious work interrupted play, we heard rumours of NASA (or some other US-based federal body) releasing access to its Earth satellite image service (don’t forget Google Earth and Google Maps didn’t happen in any tangible form until after the millennium) and we all sat around in geospatial data visualisation wonder.

But times have moved on; that was then and this is now.

Back in the 1990s, the very idea that major computing labs would have produced a terabyte server was tough to fathom. The first single terabyte 3.5 format drive didn’t arrive until 2007 and that was the 7,100 revolutions per minute Hitachi Deskstar 7k1000.

Of course, now we can fit a single terabyte on a ‘thumb drive’ type device and stick in our pocket’, today it’s not unusual to have your entire movie and CD collection stored on something the size of two fingers of KitKat.

So what to backup on now then? If one terabyte is now for kids, then surely for enterprise use (or at least enterprise use that requires serious muscle for video, high-res print or some other high-intensity use case) we have to be talking about somewhere around 5 terabytes.

We opted for the ArmorATD 5 Terabyte Hard Drive priced at £ 161.99 at the time of writing.

Encased in protective rubber as it is, the use case concept with these units (aside from storage, obviously) is the option to not have to use a carrying case with it. We think most people will want to extra-protect something like this, but the rubberised outer shell is there as well and is welcome.

SanDisk calls it the ‘most durable USB C external hard drive’ and the product’s full name is the SanDisk Professional G-DRIVE ArmorATD drive.

According to the company. “The G-DRIVE ArmorATD helps shield your photos, footage and files from accidental drops with a premium aluminum enclosure, internal shock mounts, and an easy-grip rubber bumper for durability you can trust.”

In terms of installation and use, we had to get this unit from Mac format to Windows. The official compatibility is listed as: macOS 10.12+ (Time Machine compatible) and Windows 10+ (via reformat) and it is compatible with USB 3.0 and Thunderbolt 3.

The reformat tools provided by G-Technology here will work for some users, but they actually failed for our test in the first instance. Thankfully, the G-Technology format wizard linked here worked just fine, so it’s probably worth looking at both links if you are about to reshape your disk.

The product has rain, dust, and crush resistance for up to 1000lbs and boasts transfer rates of up to 140MB/s. As well as a USB-C adapter, there is a USB-C to USB-A adapter and connectivity to smaller devices seemed to work well too.

Our overall impression here is a) gosh, that’s a massive amount of storage for considerably under £200. The current Emirates Mars Mission will generate 1 terabyte of data in years 1-2 of operations, so users should think about some fairly hard-core application uses for this type of disk (high-resolution video in the field with the ruggedised case must be a key use) in the real world.

We actually used the 5 terabyte unit to back up a couple of 1 terabyte units that are in use all the time, so its application as a sort of ‘master library duplicate’ is also (we would argue) quite appealing. The 5 terabyte G-DRIVE ArmorATD unit is solid and brick-like in pleasingly tactile way… and yes, we’re double backed up now. 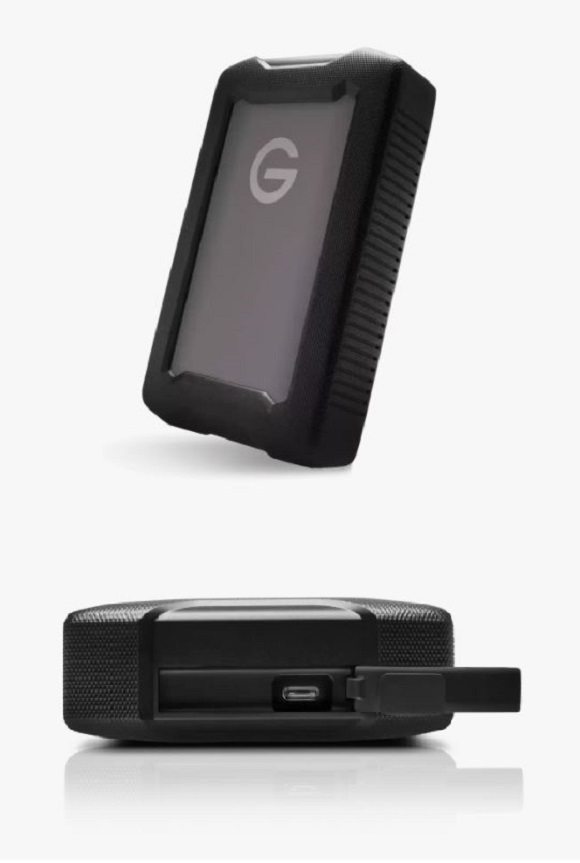