Acquired by SAP in late 2011, SuccessFactors is among the purchased brands that SAP has allowed to retain its original name in full, as opposed to others (Sybase, for example) that have been mostly or wholly assimilated and absorbed under the wider SAP brand umbrella.

The company typically uses SuccessConnect events in the Americas and Europe to announce additions to the SAP SuccessFactors HCM suite.

The new digital assistant for SAP SuccessFactors is currently in beta with what the firm calls a ‘select’ group of customers (firms rarely confirm how many companies might fall into this kind of beta group, but it’s often less than 50).

Billed as being more than just a basic chatbot play, this digital assistant software uses machine learning to guide and recommend worker actions based on verbal and/or written questions or commands.

The digital assistant uses the SAP CoPilot bot framework and SAP Leonardo machine learning to create a conversational experience — and it is also integrated with collaboration platforms including Slack and Microsoft Teams.

Importantly, the machine learning element here means that the digital assistant bot in this instance is able to learn and therefore, with extended use, start to channel and change the recommendations it gives to the user.

“Users can chat with SAP CoPilot, ask questions and give commands just as they would a regular person. Their informal and unstructured speech [is] then contextualised, analysed and used to execute actions and present the user with business objects, options and other relevant data in a simple and conversational way,” writes Andrea Waisgluss, user experience content strategist for SAP SE.

The digital assistant learns and ‘understands’ (to the degree that it has been able to compute) what an employee might be looking for. It then allows the user to take action (whatever that request might be) from the conversational interface itself.

SAP claims that this ‘simplifies and redefines’ what is possible for improving HR service delivery via automated channels in this way. It’s all about the science of decision making, or ‘decision science’ if you will.

Examples provided include answers to new hire questions; managers who want to award spot bonuses; and employees who need to enter time worked.

SAP SuccessFactors president Greg Tomb has stated that the future of HR applications is mobile intelligence that employs all the ways we can interact with tools – both verbal and written. SAP has also intimated that longer-term objectives for this technology will lead us to what has been called a ‘unified bot experience‘ across SAP‘s Intelligent Enterprise Suite, powered by SAP CoPilot.

Using native Android interaction patterns, the new app is supposed to allow employees and managers to engage with aspects of work such as continuous performance management, learning activities and people-related tasks such as time entry.

In terms of what SAP said during the opening keynote… SAP SuccessFactors president Greg Tomb noted that 101 of the events’s 140 sessions are hosted by customers. So (one hopes) this is not so much SAP pushing its own agenda, but actual use cases of digital HR practices being detailed.

Tomb wants us to think about HR not as Human Resources, but as some kind of Human Revolution with the so-called ‘workforce’ not being what we used to think of it as, that is – where it used to be one single defined body of people it is now more diverse group of people. The so-called gig economy means that 44% of spend today in most companies is spent on external workforce elements.

In terms of conference presentation and the ‘people-factor’ here, the signboards around the event included people shown in a more culturally diverse (gender, race and more) set of depictions than we might have seen a decade ago. Further, this event also had live video with voice-to-text speech recognition playing out on screens to the side of the stage for the hearing impaired.

“Everything you do when you are in a company is all about serving the customers outside the company. You always have to make the perfect link between the consumer experience and the employee difference… they are not different, they are the same thing. But as firms have grown, we’ve lost the humanity in a lot of business because silos and workcharts have gotten in the way. When we can make sure that employees understand their individual goals and know that these matter for the eventual corporate goal… then you can really change the world. Back when I was a teenager running a deli my CRM system used to be a window pane and my HCM system was a hug. Somehow we have to make these big companies feel like small companies again,” said McDermott.

Looking forward, SAP clearly wants to help customers grasp a vision and purpose (rather than just a profit goal) to enthuse modern millennial workers… this is the new world order and this (as we know) is what people want today out of a job. 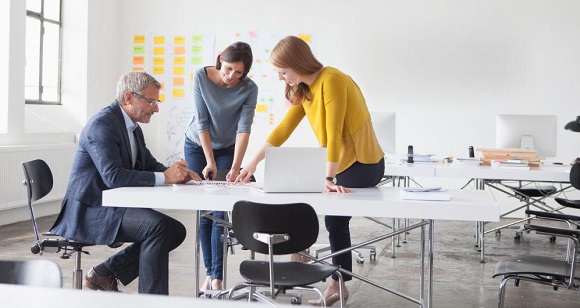