Drew Griffiths is Cohesion CEO at Acquia, a company for its cloud based hosting, support and services for Drupal (an open source content management framework).

So what’s been happening?

Griffiths notes that as with many tech giants, Google’s motto seemed to be, ‘if you can’t beat them, buy them’ these days.

Democratisation of the internet

“As the low-code movement continues to gather pace, it forms part of a snowballing democratisation of the Internet we’ve seen gather pace over the past decade. In addition to low-code app products, platforms like Wix and Squarespace have for years allowed individuals and small businesses to build whole websites using drag-and-drop tools and a visual interface. Such low-code (and no-code) tools are perfect for citizen developers, but not suitable for enterprise-level users,” he said.

The Acquia team point out that the majority of low-code tools traditionally available to enterprises still require developer input — and this can create a IT bottleneck within many organisations.

As we know, the central idea behind no-code is to allow toolsets once accessible only to coders now being made available to non-developer users in companies of all sizes, and catering for a variety of business needs.

“The migration from simple consumer tools to more sophisticated enterprise platforms is enabling businesses to create and enhance websites far more rapidly than with traditionally code-heavy methods, allowing them to bring products to market and spin up new websites and digital services far faster. These things are critical in a digital world in which developments continue to accelerate at pace and in which businesses need the skillsets, tools and agility to capitalise on this,” said Griffiths.

The magical mystical quadrant wizards at Gartner predict that low-code app development will be responsible for more than 65% of all app development activity by 2024, at which point about 66% of enterprises will be using a minimum of four low-code platforms.

So are low-code tools putting developers out of a job?

“Underpinned by visual UIs, users with a base-level knowledge of web development and CSS can build layouts, templates and components — and edit and collaborate on websites with their wider team. In terms of developers: lower-skilled elements like website theming have been replaced, but this allows developers more time to focus on value-add (and more enjoyable) tasks, like problem-solving, writing code for complex apps, and integrations,” argued Griffiths.

His team insist that low-code platforms allow users to create and edit websites, while keeping the management of projects firmly in the hands of developers. Able to set governance levels and control what other users can and can’t do, developers remain the ones who manage the scope and define the trajectory of projects — and sign off processes.

Like many firms right now, Griffiths and team say that Covid-19 has meant that we’re no longer ‘on the journey’ to a digitalised world: we’ve arrived.

Examples are cited (from April 2020) when public officials in New York City used low-code platform Unqork to create an online portal that mapped the spread of the virus and allowed residents to connect to critical services. The platform went live in just 72 hours, without the need for any code to be written.

“Early iterations of low-code came up against resistance, but this is changing, as the need for rapid digitalisation becomes the most critical factor influencing the success of a business. Covid-19 has been a catalyst for digitalisation… and in the coming months, low-code is likely to emerge as the antidote for companies seeking to innovate and evolve while continuing to deliver value for customers,” concluded Griffiths.

If it all works as it should with low-code, then repetitive non-essential tasks can be distributed to other users and a wider set of talent and skillsets can contribute to website creation and maintenance. 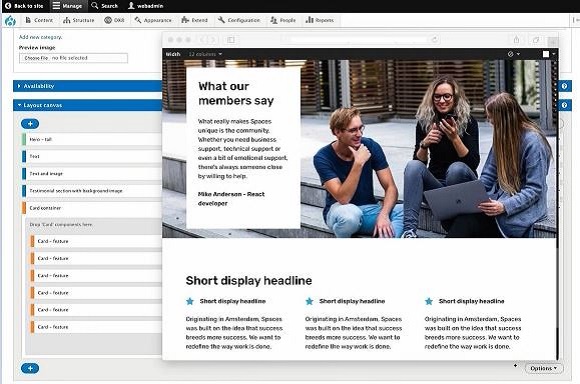