The organisation is comparatively news and it has things to say. Principally, the company highlights the fact that modern cloud apps consist of dozens or hundreds of microservices, cloud components and third-party APIs.

This we already know, so what’s the upshot here?

Ran Nozik, co-founder and CTO of Helios says that because of this (above) truth, a single initial request can hit hundreds of different services as it branches out throughout the application.

That makes it hard for developers to fully understand their code and how it interacts with the system as a whole, in their local development environment and through testing to production.

These friction points slow down the whole development process, lead to buggy code and end up frustrating the developers.

“As applications and companies grow, development slows down because it’s harder and harder to understand how one small change might affect the system,” said Nozik. “A small change or bug in a microservice or API can ripple out through a distributed app; perhaps twenty microservices later the change causes an error, or data is silently lost. Devs spend more and more time troubleshooting and less time on what they want to be doing — creating new features.”

As companies and apps grow and become more complex, codebases and developer teams expand and these challenges become more acute.

To observe distributed applications in production, DevOps practitioners use advanced monitoring platforms. Developers, though, have been left behind, missing out on new tooling for a world of cloud-native apps.

Helios claims to be able to break down the silos inherent in microservice architectures, giving developers a full understanding of how their code interacts with the distributed app as a whole so they can build, troubleshoot and test more easily, increasing development velocity.

Using OpenTelemetry to provide distributed tracing combined with other data sources, Helios enables Dev teams to track how a request flows through their application and gives them the context they need to resolve issues.

“The platform can automatically ‘replay’ inputs at any point in the application flow, allowing developers to reproduce issues with ease. With actionable insights and collaboration tools, Helios makes developers happier, allowing them to communicate and cooperate as they modify different parts of the app,” said Nozik.

Helios aims to provide the right data with the right context at the right time, throughout the entire development lifecycle, streamlining activities from design and collaboration to troubleshooting and testing.

Definition of Helios: the god of the sun in Greek mythology 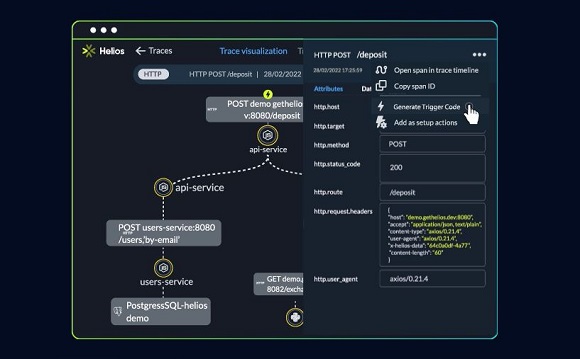