Kimberly Bryant is the Founder and CEO of Black Girls Code (BGC), a non-profit organisation dedicated to ‘changing the face of technology’ by introducing girls of colour (her preferred term) between the ages of 7 to 17 to the field of technology and computer science with a concentration on entrepreneurial concepts.

Speaking as part of an all-female panel at the Appian World 2019 conference, Bryant commented on the challenges associated with change and change management in the workplace – a subject that is, very obviously, close to her heart and very much in line with the mission that drives her organisation.

“Being a change agent is always tough and running a start up like BGC means that change is a constant. When I first started in a previous role, I worked on a team that was responsible for many different automation systems,” said Bryant.

Bryant thinks that the best way to approach change in seemingly impossible situations is all about getting ‘proximate’ [achieving a close level of proximity] so that you can understand where previous projects have failed.

Wolfe spoke about the need to show employees just how much an enterprise is investing in the team when change is happening – for her, it’s all about having ‘adult conversations’.

Bryant backed this up by saying that it’s important to have ‘total transparency’ [even during staff layoffs and other times of vulnerability].

Stand back for strength

“What I am dealing with now at BGD is all about change. We recruited a new board of directors last year… but what’s interesting is the storming, forming and norming process that our leaders have brought forward now that we’re all together. I think it’s important to be able to step back and let that happen. As a leader, it’s important to realise that you don’t always have to be out in front as you allow a strong coalition to form around you. Abraham Lincoln did this… and I think it’s a good lesson to take on board,” said Bryant.

Kamoda back all of these comments up by saying that it’s important to give people time to digest change and let things ‘translate into their own language and words’ – especially when so much business change is going on.

Wolfe concluded by saying that to handle change, we need to be humble, respectful and straight – it’s a medicine strategy that revolves around tough love.

This was an all-female tech leadership panel that didn’t actually mention the term ‘women in IT’…. could we finally be getting to the point where we can take these people for their skills and experience rather than having to taint that with a note of their gender?

Let’s hope so! Plus ça change! 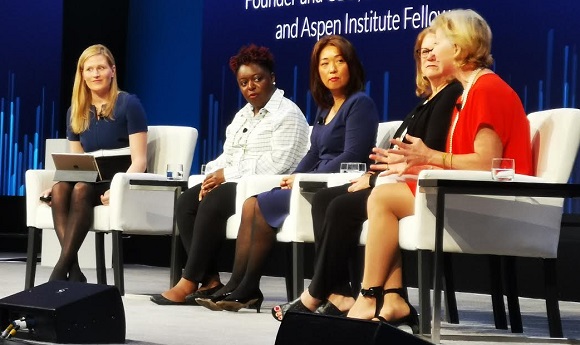