This year’s event was due to be staged from March 8-11 at the Diplomat Beach Resort in Hollywood, Florida (which people think of as Miami, but actually it’s almost Fort Lauderdale).

But, given the global outbreak of the Coronavirus Covid-19 and the disruption that has ensued in the wake of the threat to health, Appian (like almost every other conscientious conference organiser everywhere) decided to cancel any on-the-spot attendance in Miami and opted for virtual delivery of its show materials.

So then, rather than taking in the sunny shores of the sunshine state, we opted for a selection of calls and conversations with Appian’s C-suite to get the inside track on the company’s latest low-code advancements.

Ayllón is vice president of the RPA COE (center of excellence) at Appian — and Weber is the chief information officer at Appian.

Ayllón and Weber explained how the firm has worked to progress the RPA offering inside Appian and (with Appian having been built with Java at its core) said that it has always been a mix of both technologies and culture too that have to come together for any acquisition or partnership to actually happen.

CIOs and sysadmins need a one-stop-shop for automation and that’s a lot of why Appian has worked to try and promote full stack automation. Both Ayllón and Weber agreed with the fact that case management is indeed a broad term as defined in full in this Computer Weekly story linked here.

It’s a question of the right technology for the right use case (agreed Ayllón), so increased use of automation throughout the business (in low-code and, potentially, outside of low-code arenas) we will be able to ultimately be able to more accurately know which tasks should be more centralised around humans.

Next… we connected with the chief himself. Matt Calkins is Appian CEO.

Calkins noted that although the conference itself was rescheduled to a virtual presentation, the intention was to release all the news that the company had intended to release at the time of the event.

Calkins gave a scaled-down press-only version of his keynote and noted the following:

The four components of the modern workforce are: humans + RPA + AI + rules (as in business rules). But it’s important to think about the mix here because AI has intelligence, but is better off appraising and identifying… and RPA always has exceptions… and business rules are an essential part of the whole concept. But each of these components must complement each other… and Appian is now bundling all these four components together.

Appian made an RPA acquisition (Novayre Solutions SL) at the start of this year in order to be able to put RPA into the mix. In AI, Appian has added document processing intelligence into its platform because, of the total number of use cases of Appian, as many as half of them call for document processing as a key capability.

CEO Calkins eluded to the way the platform may develop in the future… in terms of data integration, Appian always says that it doesn’t ‘insist’ that data gets moved to Appian itself i.e. the platform can work on data where it resides. In terms of analytics, Appian offers a degree of (comparatively basic) analytics as part of its platform, but does not pretend to be an analytics (big data analytics, log file analytics or other) engine in and of itself… so again that point comes back to integration.

Next… we spoke to Appian’s Mike Beckley in his role as CTO.

Beckley drilled into where human workflows will dovetail with, handover to, get human-handoff back to automation as needed. But to start this process successfully, the workflow itself must be modeled as a human workflow in the first instance before the Appian Robotic Workforce Manager can start to perform the delegation tasks to the computer brains involved.

The rationale behind this is because if you design with the concept that bots are perfect, then you are setting yourself up for a fall noted Beckley.

Appian CTO Beckley is suggesting then that there is perhaps something of total automation lifecycle then. This might be described as: bot deployed, some work effectively, some use excessive human-hand-offs (or find that their data source gets corrupted or badly tuned) and so some get retired and removed, some get repurposed and so some ultimately reinforce the fact that a particular part of a workflow should be put in human hands.

Appian confirms will stage a full-blown virtual version of its show in place of the event itself and is of course focused on delivering Appian World 2021. 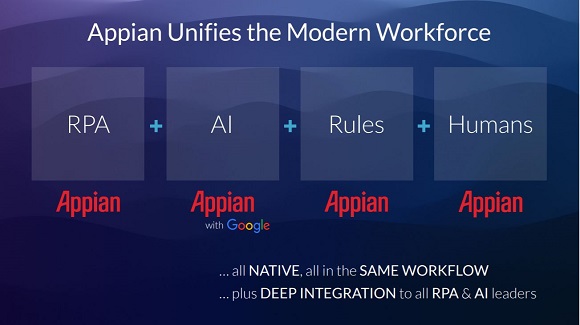 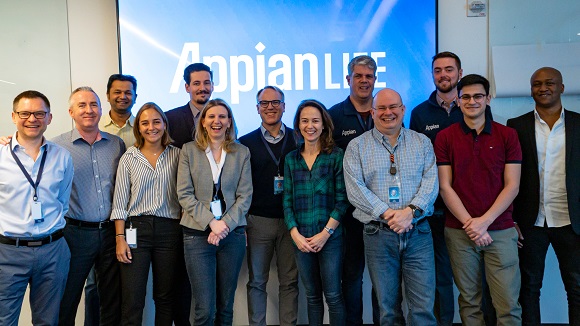