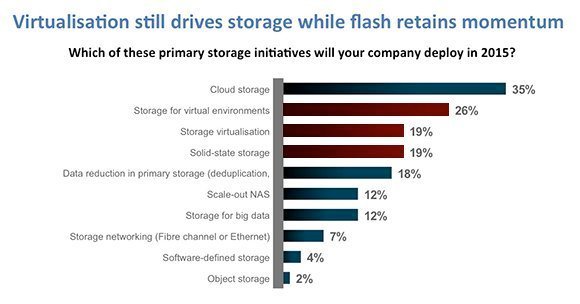 Interest in flash storage seems to have flattened off, with 19% indicating it a key priority for 2015. That’s about the same as last year (20%), and 2013 (18%). The upward gradient in the graph happened after 2012, when only 9% had flash storage on their radar. What the survey doesn’t tell us is what type of flash deployment organisations are opting for. According to another survey we ran last summer on ComputerWeekly.com, from 451 Research, for most respondents (67%) flash in use now is installed in existing SAN/NAS storage arrays while 25% put it in servers. Only 8% reported deploying all-flash arrays. So, for the most part IT departments see the addition of flash to existing storage or servers as the best way to boost I/O performance for key applications.