Note-taking on the beat 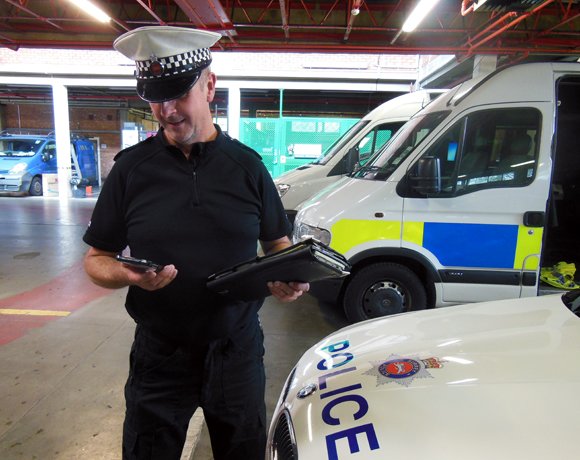 The electronic notebooks are the first point of contact with the public. Officers can use them to gather information and note taking, but also to fill in forms and issue tickets.

The smartphone camera can be used to embed photos into the business processes, such as taking a photo of a broken tail light as evidence, or taking a photo of the offender when they are given a ticket so they can’t get away by claiming it wasn’t them.

Officers keep Bluetooth printers in the vehicle for on-the-spot tickets, because legislation states that tickets can’t be emailed, and the recipient must be given a piece of paper. But the entire process of giving a ticket has been cut considerably. It takes a couple of minutes to tap the details on the smartphone and print out a ticket via Bluetooth, compared to up to seven days for a person to receive a ticket in the post in the traditional way.

Additionally, calling up base for a name check on a person could traditionally take up to 20 minutes, now this database is accessible from the smartphone, it can be done in seconds.

Most of Surrey police officers also Tweet from their mobile, to inform followers where they are or what crisis they are attending.