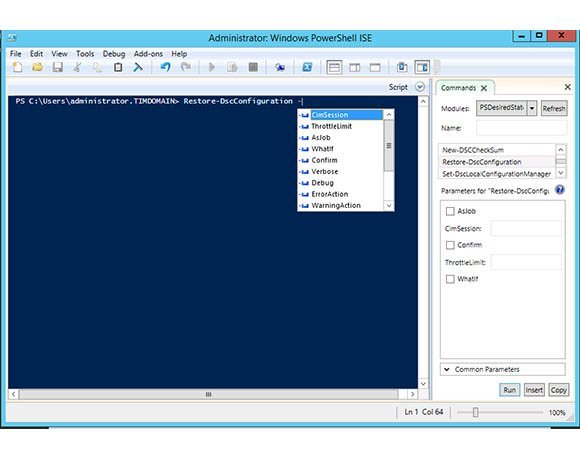 PowerShell is significant since the company sees it as the most complete and powerful way to manage Windows Server. The GUI (Graphical User Interface) tools are no longer intended to cover every option, but only those that are most frequently used. The rationale for the shift is that scripting enables easy automation and remote management, both of which are key to efficient administration. Using PowerShell also makes it easier to shift to Server Core, which has a minimal GUI.

Desired State Configuration (DSC) is a new feature in PowerShell 4.0 which lets you define the configuration of Windows Server features and apply them to a server instance. It is idempotent, meaning that you can run a configuration script repeatedly without breaking anything. DSC is only effective for features that have a DSC provider, which currently means basics like files, services and user accounts, the ability to install roles and features, and support for IIS (Internet Information Services) configuration and content. DSC has great potential, since scripts can be versioned and modified, and this is a powerful tool for bringing together development and operations. Its potential will not be realised though until more comprehensive providers are available.