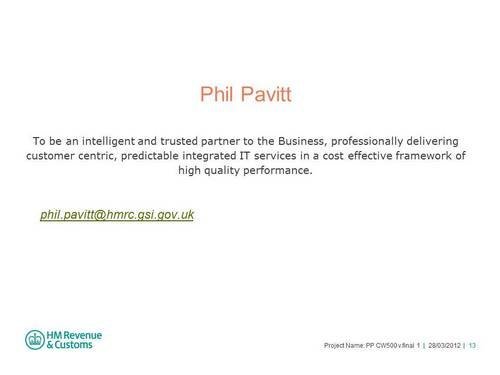 Does Pavitt’s success at HMRC mean that the era of big government IT failures is at an end ?

Pavitt is realistic. IT is a collection of mechanical components, he says, and every now and then, projects will fail.

“I promised my board that we would still have IT failure, project failure, all sorts of failure. But I promised that the failures would be very short,” he said.

Nevertheless Pavitt says he has succeeded in reducing the failure rate dramatically. HMRC prints 500 million pages a year, for example, but instead of millions of incorrectly addressed envelopes there might now be a few thousand.

“I do have the odd moment of self doubt, on the train, going home in the car,” he said. “But it does not last long. Only for a moment.”