True to its word, Microsoft has released a new Technical Preview build for Windows 10, which brings the highly anticipated Cortana personal assistant to UK desktops for the first time. 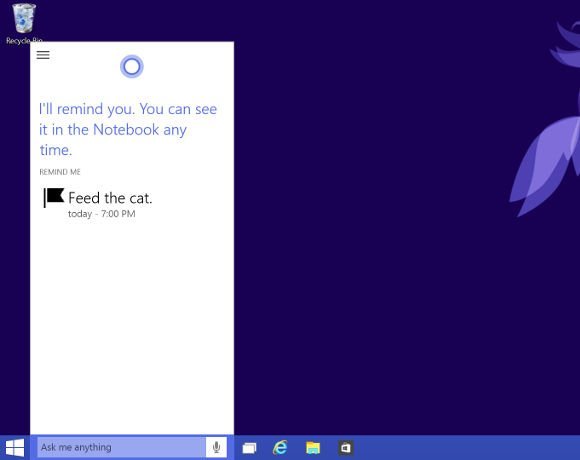 Microsoft’s answer to Siri and Google Now, Cortana, was originally developed for Windows Phone, but the rhetoric coming from Redmond suggests that the personal assistant will be deeply integrated into the desktop operating system. Cortana will not only tie in with Windows applications but will be available for third party developers to work with. Marcus Ash, the group programme manager for Cortana, explained in a blog post that the assistant would float between devices.

“Your experience is fluid, and roams with you across your devices,” he wrote. “Cortana knows that when you’re on your phone, your interaction is generally going to be brief; when you’re on your PC, your goals are going to be in line with steady periods of productivity. We’ve developed new visions and new scenarios meant to make life easier, and more fun, regardless of the device you’re using.”

Microsoft added on its product page: "We're not saying she'll pass the Turing test, but the more she helps you out, and the more she learns about you, the better she gets."

While ‘she’ has been available to Windows Insider Programme members in the US for a while, Build 10041 opens up the door for users in the UK, France, Germany and Spain. Users must be in the ‘fast ring’ to receive the build, however, changing between the two requires just a few clicks.

The scope for voice recognition as a practical tool remains unclear. While voice recognition applications have proven to be inconsistent and unreliable over the years, big steps have been taken recently with Nuance leading the way. The maker of Dragon Naturally Speaking and the engine behind Apple’s Siri has proven that there is a market for voice recognition done right; and with the ever-increasing number of smartwatches and other IoT devices, voice is becoming an increasingly viable interface.

Check back for MicroScope’s review of the new Windows 10 Technical Preview build.