What a difference a decade can make. When we looked at the world of private cloud almost a decade ago, it was a new idea to many people – so new, in fact, that we had to define it for them. In 2021, the term is so much better known that in some ways it’s almost become redundant, as ‘just another facet of modern IT.’

As our contribution to the bit of fun that is Throwback Thursday, we’re taking a regular stroll in the Freeform Dynamics archives. 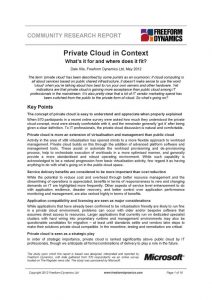 Back in 2012, we defined private cloud as a general-purpose platform created on top of pooled resources (server, storage, network) and designed for rapid and dynamic allocation to, and reallocation from, a variety of workload types.

For quite a few respondents, this defined what they were already doing with server farms and pools of VM hosts, while others reckoned it was simply a rebranding of grid computing. Well, fair play to them, because there’s arguably very little that is genuinely new in all of IT – so much is actually rebranding, reorganising and remixing. Then again, you can say this of much of human endeavour – the cleverness is in how we take existing ideas and combine them in new and innovative ways.

What’s interesting now is to look back and see that many of the comments we received said that our definition was missing two key factors: user self-service and either chargeback accounting or the ability to assign consumption-based costs to departments, services, applications, and so on.

(As a curious aside, ten years ago this kind of usage reporting was seen as an attractive idea by IT, but was often resisted by business stakeholders. The latter of course feared being blamed or charged for their use of what they regarded as a common resource, shared by all in the company. One wonders how many of those resisters are now happily signed-up to pay-as-you-go public cloud services.)

So what sets private cloud apart from VM farms and the like?

Anyway, those respondents were right, of course – and in fact we had left those factors out deliberately, so as not to constrain our working definition too much. But what they missed was that while these were (and are) very important, they are actually second-level consequences of the real essential element in clouds of all kinds, which is automation.

We had hinted at this in the report, with words such as ‘flexible’, ‘rapid’, ‘dynamic’ and ‘on-demand’, but only in the years since has it become clear that almost all of this can be neatly summed up by the A-word.

And of course, I’d argue that it’s automation that’s the key thing differentiating private cloud from a virtualised server farm or any other pool of shareable resources.

If you’d like to step back to when private cloud was a novelty – even if many of the ideas that underpinned it were already decades old – you can download it from our website here.