In this edition of Tech on APAC, we’ll cover the top news headlines in the region for the month of September, starting with a notable win by Microsoft in Australia’s cloud market.

In mid-September, the Western Australia government said it was expanding its use of Microsoft’s technologies in a new agreement that will let all its state agencies tap Azure cloud services and cloud applications including Office 365 and Dynamics 365.

It’s a major win for Microsoft which has been making inroads in Australia’s public sector in recent years, including investments in two Azure cloud regions to support the mission-critical demands of government and critical infrastructure.

In this Loom video, check out our take on the story and more. Please tell is what you think in the comments and have a great week ahead. 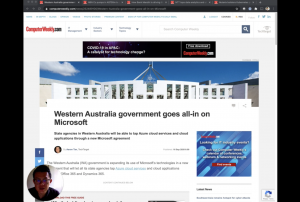