AWS has come forward with a new developer offering, of quantum proportions.

Amazon Braket is said to help developers (and researchers) get started with quantum computing with tools, simulators and access to a set of quantum hardware and quantum algorithm design options.

This is a (perhaps somewhat obviously) fully-managed service that offers access to quantum power running on computing resources in AWS.

When ready, developers can use Amazon Braket to run their quantum algorithms on their choice of quantum processors based on different technologies, including systems from D-Wave, IonQ and Rigetti i.e. manufacturers of real world quantum processing units and machines.

Both simulated & quantum hardware jobs are managed through a unified development experience.

As we know, quantum computing has the potential to solve computational problems that are beyond the reach of classical computers by harnessing the laws of quantum mechanics to build more powerful tools for processing information.

“Today, making meaningful advances in quantum computing requires organisations to develop in-house expertise and seek out access to limited quantum hardware. Researchers who are interested in experimenting across a range of quantum hardware and technologies need to setup and manage the necessary infrastructure, negotiate access with multiple vendors and write custom code to interface with different quantum processors,” said the company, in a press statement.

The AWS team note that Amazon Braket lets developers get started quickly, using familiar tools like Jupyter notebooks to access pre-installed developer tools that can be used to design quantum algorithms, visualise results and collaborate with others.

Design quantum, or use pre-built

Amazon Braket offers cross-platform developer tools that let customers design their own quantum algorithms or choose from a growing library of pre-built algorithms.

“As we see quantum computing technologies make more meaningful progress, thousands of customers are asking for ways to experiment with quantum computers to explore the technology’s potential and contribute to its development,” said Bill Vass, vice president of technology, at AWS. “The cloud will be the main way that customers access quantum computers and combine those systems with high-performance classical computing for certain types of computationally-intensive research.”

In addition to running quantum algorithms, customers can also use Amazon Braket to run ‘hybrid algorithms’, where the combined use of quantum and classical computing systems can help overcome the limitations that are inherent in today’s quantum technology. 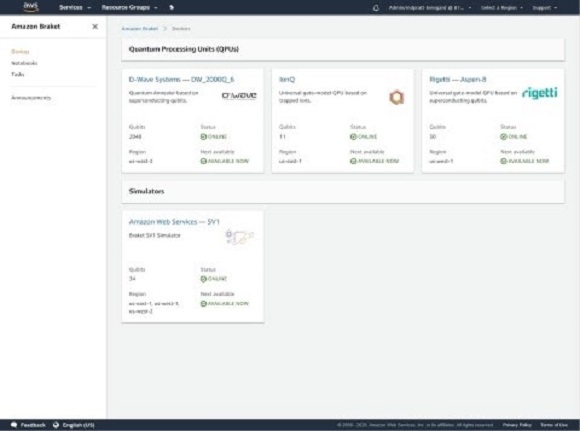