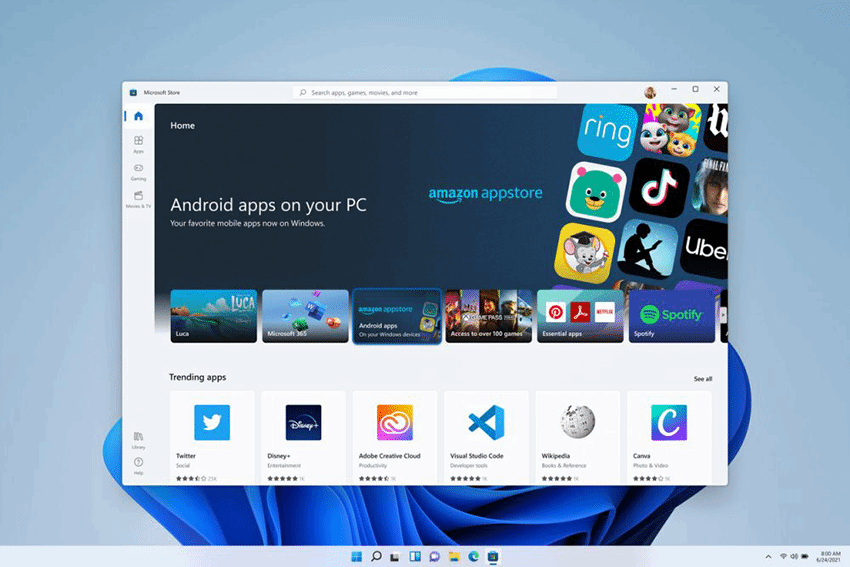 The Windows Store now supports Java packages and web-based apps in Electron or bundled as PWAs. Perhaps most important is that software developers can even bring their own payment engine, which enables them to keep all their revenue without giving Microsoft  a 15% commission. This is the reason why big subscription applications like Adobe’s Creative Cloud and Acrobat DC are already in the revamped store. It’s likely many more applications will be available in the Windows Store before launch.

The main feature missing in this first preview is support for Android applications in the Windows Store. Building on Amazon’s App Store and Intel’s tools for running ARM code on x64 hardware, it will allow Windows users to install and run familiar Android apps on a PC. While this means it will not be able to support applications that use Google’s Play APIs, any application recompiled for Amazon’s popular Fire tablets will run on Windows 11.

Still, that gives us something to look forward to for future builds. This first preview is intended for developers, but feels a lot more stable than early builds of Windows 10 did. This is perhaps not surprising, as Microsoft is building on its Windows-as-a-service model, which it has used for the past few years. In fact, much of Windows 11 has been running in the Dev channel for some time now, masquerading as a preview build of an upcoming Windows 10 update. The Windows 11 release represents the marriage of the heavily tested Windows platform with a set of new user interfaces.

Under the hood, Microsoft brings support for 64-bit Intel apps to its ARM-based devices, while new ARM-programming tools finally deliver an ARM64 version of Office. Windows 11 breathes a breath of fresh air into Windows on ARM, and the Surface Pro X feels snappier with the new OS. Hopefully more ARM devices will be available in the future, as their connectivity and battery life makes them an ideal portable device. Support for Android applications should also help here, with a library of tablet- and mobile-ready apps.