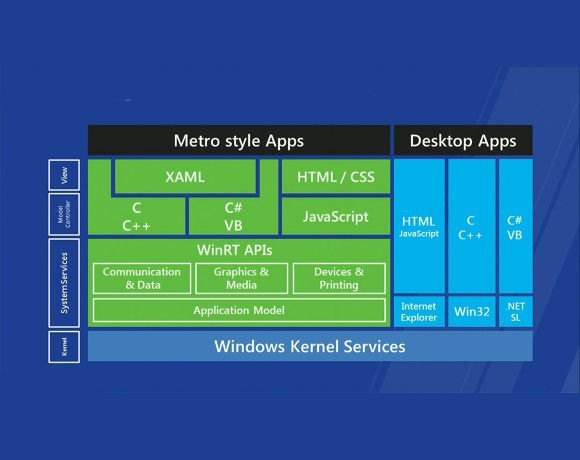 The Windows Runtime architecture, as presented in the early days of Windows 8, remains as the underpinning of Universal apps in Windows 10.

A universal app is related to the touch-friendly app platform originally known as "Metro" and more later called Store apps. In Windows 8, these apps have the following characteristics:

Store apps are managed by a runtime layer called the Windows Runtime or WinRT. This offers a subset of the Win32 API used by desktop applications, supplemented by new APIs of its own. It is oriented towards security and responsive performance.

Apps run in a sandboxed environment, where each app has its own isolated storage and limited ability to interact with other apps or with the operating system, though signed enterprise apps can bypass the sandbox if necessary. The model is cloud-centric, with data stored on the device only for performance or offline support.

Apps are deployed via packages delivered either from the Windows Store, or using deployment managers such as Configuration Manager (part of System Center) or the cloud-based Windows InTune. Developers can also install apps for test and debug. There are no complex setup routines and app removal is easy.

Store apps support four approaches to development. Developers can use.NET languages such as C# and Visual Basic, or C++, or HTML and JavaScript, or accelerated graphical programming using DirectX.

Other than for custom graphical user interfaces, the UI for a Store app is defined either in XAML, an XML language also used by Windows Presentation Foundation and Silverlight, or with a JavaScript library called WinJS. Both approaches have similar chunky controls designed for touch use.

Windows 10 retains the technology of Windows 8 Store apps, but with important changes. One is that Windows 10 universal apps run in a desktop window by default, making them seamless for desktop users. A full screen mode is still supported, either by maximising an app, or by engaging 'Tablet mode'.

Another key change is .NET Native, which compiles Store apps written in C# to native code (other .NET languages are likely to follow). Apps are self-contained native code with no dependency on the .NET runtime. The result is fast start-up as well as better performance for some types of application.