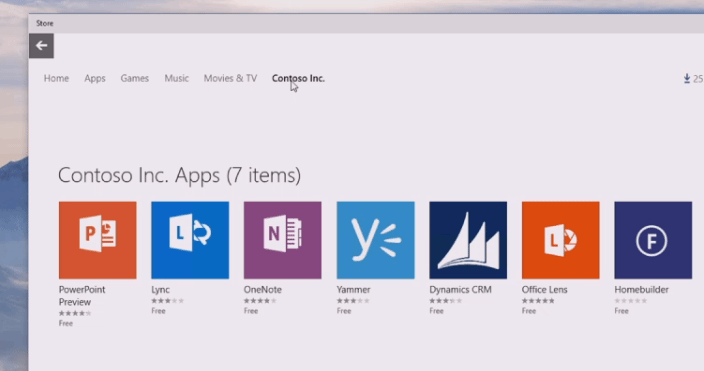 A common complaint about the public Windows Store in a business context is that it is unsuitable for private line of business applications. The Business Store addresses this by allowing developers to upload applications that are private to an organisation. The way this works is that developers are first authorised to submit applications by the Business Store administrator. Next, the developer uploads a private application to the Windows Store Developer Center in the normal way, but specifying that it is private to the organisation. The application then becomes available for selection and assignment in the Business Store. It does not appear in the public Windows Store, but only shows up for users logged in with the correct Azure Active Directory credentials. Business Store apps can also be deployed through System Center or other management tools. The key here is that Windows has Mobile Device Management (MDM) application program interfaces (APIs) similar to those on mobile devices. System Center Configuration Manager can integrate with the Business Store, so administrators can select applications and push them out to users. One scenario here is that applications are deployed from the Windows Store, but still pushed out by System Center and installed automatically. Another scenario is called offline deployment. In this variant, administrators download the .appx package from the Business Store and deploy it from their own servers. They use System Center to specify the location of the package and push it out to users. Another option is to use deployment image servicing and management (DISM) to inject the application package into Windows system images, which are then deployed to PCs. The offline approach gives maximum control to the organisation, which no longer depends on the application package being in the Windows Store and in the right version for their needs. Offline deployment also supports private company portals, allowing users to self-select applications from those available.