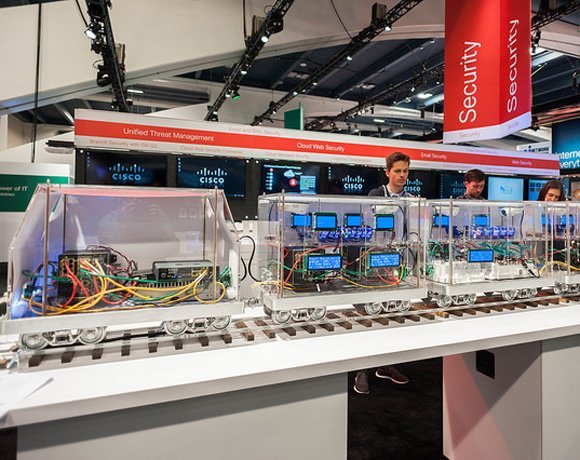 One of the major themes this week was the internet of things (IoT) or internet of everything (IoE). Cisco believes this trend will be one of the main networking drivers over the next few years with 50bn devices expected to be connected by 2020.

One industry where this trend could disrupt traditional technologies is transport. Cisco said it is working with several transport companies including Network Rail and Deutsche Bahn to connect its technologies.

But he also said different cities in the world are embracing IoT at different speeds and in different ways. He said Barcelona has seen revenues and great citizen experience from automating parts of the city, as well as Japan. He also noted Argentina as a country beginning to realise the benefits of IoT in the manufacturing industry.

“We’re also seeing parts of the US driven by the consumer industry and wearables,” he said, noting sport, entertainment and healthcare as industries influencing consumers involvement with the IoT.

“Each country is embracing IoT in a different way,” he said. “It’s global trend, but Germany in my opinion has big companies embracing it.”

But the industry still has to secure the networks for IoT. “There’s a lot of work still to be done to take this vision and make sure it manages all the risks that are out there," said Bret Hartman, vice-president and chief technology officer for the security and government group at Cisco.

Speaking at a media roundtable during the supplier’s annual Cisco Live conference in San Francisco, Hartman said that when things become very connected, they are also difficult to secure.

“What do I trust?” he said. “I can’t address security by dropping in a firewall box, so how do I make security pervasive and cover the entire network?”

Because the network for IoT is so large –connected cities or healthcare and wellbeing devices which talk to each other, for example – the attack surface becomes enormous and the odds of hackers being able to successfully intercept data become higher.