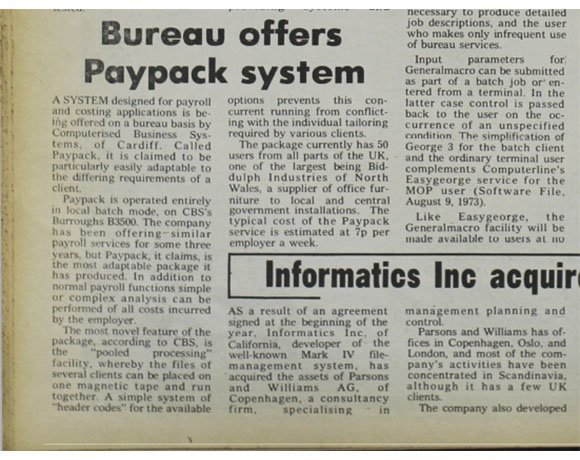 This story really got us interested because it’s almost like a time capsule from the cloud era has been sent back in time to1974. Here’s the article in full:

A system designed for payroll and costing applications is being offered on a bureau basis by Computerised Business Systems, of Cardiff. Called Paypack, it is claimed to be particularly easily adaptable to the differing requirements of a client.

Paypack is operated entirely in local batch mode, on CBS’s Burroughs B3500. The company has been offering similar payroll services for some three years, but Paypack, it claims, is the most adaptable package it has produced. In addition to normal payroll functions simple or complex analysis can be performed of all costs incurred by the employer.

The most novel feature of the package, according to CBS. is the “pooled processing” facility, whereby the files of several clients can be placed on one magnetic tape and run together. A simple system of options prevents this concurrent running from conflicting with the individual tailoring required by various clients.

The package currently has 50 users from all parts of the UK, one of the largest being Biddulph Industries of North Wales, a supplier of office furniture to local and central government installations. The typical cost of the Paypack service is estimated at 7p per employer a week.

The National Museum of Computing has a full copy of every print edition of Computer Weekly since our first in September 1966, and is now digitising the archive.

In the next slide, we presented a letter on self-documenting Cobol from one of Computer Weekly's readers from January 24 1974.