Last week Reuters reported that AMD had brought in a consulting company to explore the possibility of splitting the company, similar to the likes of HP and CSC.

While it is standard operating procedure for companies to ‘refuse to comment on market speculation’, AMD did just the opposite and issued a statement. An AMD spokesperson told ExtremeTech, “While we normally would not comment on such a matter, we can confirm that we have no such project in the works at this time. We remain committed to the long-term strategy we laid out for the company in May at our Financial Analyst Day.” 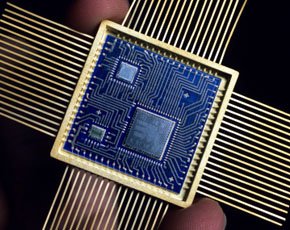 So that’s that then. Well, not entirely. Market-watchers still have ants in their pants, dissecting the possibility that AMD may split its graphics and licensing business from its server division. And it wouldn’t be the first time that a company has played down rumours over a major restructuring. So since everyone is kicking the idea around, we thought we might too.

First, a bit of background.

AMD was, and still is, the only competitor to Intel in the x86 processor market. In its heyday, it stood toe to toe with the chipmaker, but in recent years, it has struggled to keep pace. As graphic processing units (GPUs) moved towards becoming integrated with processors, AMD had to take a bold step and in 2006, acquired graphics processor vendor ATI. It was an essential move if AMD wanted to remain competitive in the processor market, but a move that ultimately left the company swimming in a large pool of debt.

The integration of ATI’s technology took longer than expected and before AMD knew it, Intel was a tiny spec on the horizon. AMD’s fall from grace has been slow and painful. In 2009, the company became fabless after GlobalFoundries was spun off and it has since aggressively attempted to expand its portfolio with the likes of ARM-based server processors.

Alas, none of this has slowed the haemorrhaging and in April AMD delivered under forecast with revenue falling 26% YoY to $1.03bn and a net loss of $180m. The quarter before, it posted a net loss of $364 million. In short, these are not good times for the once loved CPU-maker.

So CEO Lisa Su has a mammoth task ahead of her and will be under a tremendous amount of pressure to right the ship. She would not be doing her job if she didn’t consider all options at this stage and she should not be taking anything off the table just yet.

However, it is difficult to see a pragmatic way in which AMD could operate effectively as two separate entities. Unlike HP, both sides of AMD’s business rely on the same technology-  x86. Intel licenses AMD the right to use the x86 architecture on which AMD's x86-64 is based. With two new companies reliant on Intel, that could prove to be an awkward conversation.

With debt of around $2.27bn, the two smaller companies would have take on their fair share of the financial woes. AMD would, in effect, slash its available resources, all of which are need to fight its battles.

And despite its weak standing, AMD fights David & Goliath scale battles every day. It competes at the peak of two vital industries - graphics and processors. In both of these markets, it remains the only significant challenger to NVIDA and Intel respectively.

AMD plays a vital role and the technology landscape would undoubtedly be a poorer place without its presence; however, splitting the company does not look like the most effective way of saving this great institution. Hopefully Lisa Su agrees.