The video conferencing market has been relatively quiet in terms of generating headlines since the days it involved Noel Edmonds and Cisco was banging the drum loudly over its telepresence technology.

But in the last week words "video conferencing" have become talking points again as the spotlight shifts onto the latest technology and how the cloud is being used to deliver services.

Last week, Microsoft entered the boardrooms of customers with its Surface Hub product and appointed a range of channel specialists, some with strong audion visual backgrounds, to take the product to market.

Although the Surface Hub is much more than a video conferencing solution, the large format touch screen provides a great deal of functionality leaning on Windows 10, one of its uses it to encourage collaboration.

No sooner had the inked dried on an analysis of what the Hub could do for customers and the channel, with opportunities to challenge those customers using projectors with an alternative, than another twist on the traditional video conferencing story emerges.

Blue Jeans Network is a cloud-based video conferencing provider that allows users to connect to its platform through any device with a camera and is paid for by subscription.

Taking a SaaS approach means it can avoid some of the traditional problems that customers have associated with video conferencing.

Stu Aaron, chief commercial officer at Blue Jeans, said that the market was growing strongly as a result of changes in the workplace that meant more people were working remotely but compared to audio conferencing there was a lot of catching up for video to do. 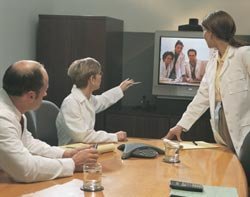 He quoted figures that indicated that voice minutes ran into the billions compared to just a couple of hundred million of video.

"We want to convert every audio call to a video call," he said that users were already comfortable with audio conferences and it aimed to get that same ease of use and familiarity with the video side.

Grwoth in the videoconferencing market is also presenting the channel with opportunities and a broad set of resellers are being given a chance to take the collaboration and communications message out to customers.

Aaron said that it works with audio visual specialists, existing video conferencing players as well as the IT data channel.

He said there were chances for them all to add value to what they were already pitching to customers because a SaaS solution would provide additional subscription revenue to the hardware and software package.

Aaron said that the reason why existing video conferencing players had never chosen to go down the cloud route was because they came to the problem with a legacy of selling hardware.

"We treated it as a computing problem not a video problem," he added that now was the time for the channel to embrace it as it was, "the right time and the right place."

James Campanini vice president and general manager EMEA at Blue Jeans Network, said that it was expanding its presence in the UK, opening new offices in London, and had already established relationships with many resellers.

"The business has grown up and we are picking up more interest from partners..some of them don't want to be left behind selling [hardware] endpoints," he said.

In the past there were always several reasons why customers, SMEs in particular, struggled to embrace video conferencing.

1. Complexity -- the traditional systems involved a fair amount of knowledge which put some users off and put the burden on an already overstretched IT department.

2. Incompatibility -- systems tended to be proprietary and require the same platform being used by all particpants.

3. Expense -- people had to pay a lot of money for the video conferencing experience splashing out for the hardware and the software.

With a market in growth it is no surprise that Blue Jeans is not the only player targeting the cloud approach and some of the big beasts in the market are also turning in that direction.

Last week, MeetingZone revealed that it had become one of the first to take Cisco's Collaboration Meeting Rooms (CMR) technology out to the market.

The cloud-based service gets round some of the traditional issues that customers have had with video and is pushing the ease of use message, encouraging users to continue to use existing systems with the cloud technology.

"Cisco CMR Cloud is the glue that sticks all these video conferencing systems together. It's best thought of as a secure, virtual meeting room in the cloud," said MeetingZone's CEO, Steve Gandy.

"But whereas traditionally such rooms required participants to have the exact key to gain entry -- in other words, they all needed to be on the same system -- CMR Cloud lets you give people a skeleton key that opens the door regardless of the technology they're using," he added.