Remote working– aka working from home (WFH) – is a contentious issue. On the one hand, there are an increasing number of employers that are radically changing their approach to flexible working, allowing employees to clock on from home or work when it suits them, rather than undertaking the standard 9-5. The argument goes, and it is backed up by a fair amount of research, that employees are more productive when they are given the power to choose how and when they work. 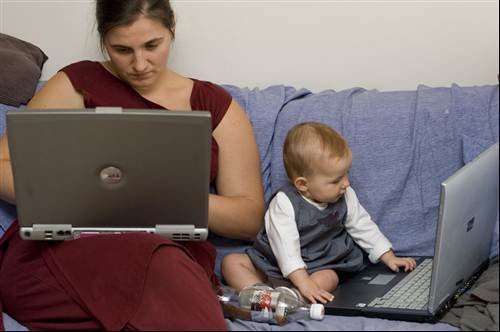 On the other hand, there are employers like Marissa Mayer, the CEO of Yahoo, who decided to ban all forms of remote working and insist that employees make the effort to come into the office. The thinking behind the strategy – the workplace is more than just a building; it is a hub of creativity and community. It’s where people bump into each other in the corridor, chat in the canteen – and it is in these moments that great ideas are born.

Both arguments have merit, which is why the debate furiously rages on. To add fuel to the fire, a new report was released today, which revealed some distasteful truths about the growing army of home workers.

The study, commissioned by Altodigital, found that 35% of home workers choose to work in their pyjamas rather than dress for the occasion. Even more disturbing, one in ten admitted to working naked while taking phone calls with clients and colleagues. Surprisingly, men were twice as likely to don their office wear for a day of home working.

Social scientist and psychology author Anjula Mutanda said that dressing for the occasion could have an impact on productivity.

“It is important to be aware that how you dress may more subtly affect your mood and attitude, and it can be particularly challenging to maintain a professional and focused approach when working from home,” she explained. “You may enjoy being able to wear your dressing gown all day, but this may sub-consciously put you in the weekend relaxed mood and could slow you down.”

The study also revealed some home truths about productivity levels. Despite 40% of workers claiming that their productivity levels more than doubled when at home, 41% admitted to skiving, with the top distractions being TV (24%), household chores (27%) and playing with the children (26%). One in 20 admitted to choosing a nice soak in the bath over actual work and 6% admitted to doing no work at all.

Another productivity killer was technology. Tech has been the key enabler when it comes to home working, but according to the research, 40% suffered from slow internet speeds and one in five faced connectivity issues on a regular basis.

The report also highlighted some of the positives. Helping to support employee’s family commitments (23%), improved concentration (20%) and saving on travel costs (15%) were just some of the benefits stated by respondents. Tony Burnett, group sales director at Altodigital, said that the key was to have defined policies in place.

“Over the past few years we have seen a clear trend in businesses looking to implement effective WFH policies for their staff and though the many benefits are undeniable, firms must work sensibly to ensure they are getting the most out of their employees when they are working away from the office,” Burnett concluded.