<< Access the first part of the Windows Azure tutorial here

Read the third article in our Windows Azure guide series >>

Microsoft entered the cloud computing arena with Windows Azure, a Platform as a Service (PaaS) offering, way back in 2008. After initial free availability for developers, the platform was made available commercially around February 2010.

Over the years, the Windows Azure cloud offering has matured considerably in terms of number and capability of service offerings. One of the main offerings is termed as “Compute” or “Hosted Services”, through which applications can be deployed on one or more virtual machines at Microsoft’s data centers. Using the remote desktop feature one can check the deployed application and the hosted machine. This Windows Azure guide will discuss scaling of applications to increase or decrease the number of these virtual machines.

This Windows Azure guide addresses the key value proposition of cloud computing, which is the notion of infinite scale. For hosted applications in the cloud, one of the major aspects that organizations look forward to is the ability to scale up/down or outwards on demand or automatically based on rules and trigger conditions, in order to handle variable loads, rapid growth, predictable and unpredictable bursts, and so on.

For Windows Azure hosted applications, the virtual machines at Microsoft data centers run a customized copy of Windows Server 2008 R2 along with Internet Information Server (IIS) 7.5 and .NET 4.0 (as of April 2012).

An application running within IIS is termed as a Web role.  On the other hand if the application is a Windows Service, Web service, batch process, background task, or any kind of process that runs outside of IIS, then the application assumes a Worker role. Web roles are assigned an “http” URL (http://<your_unique_application_name>.cloudapp.net) while Worker roles can be any arbitrary process that performs some operation in response to an event or by checking an external data structure such as an Azure storage services queue.

For this Windows Azure guide assume that we have deployed either or both types of roles (as appropriate) and now need to scale the Web roles and Worker roles independently, as they are normally deployed as separate VMs.

As the first step in this Windows Azure guide logon to the Windows Azure management portal (http://windows.azure.com) and sign in with your Live ID. Click on the Hosted Services button to see your list of deployed applications. Next, choose the Web/Worker role, select the Configure option and edit the XML content. Change the instance count appropriately, as shown in Figure 2. 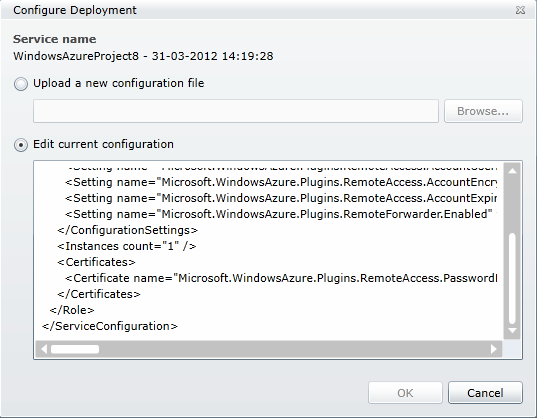 Part 1.Explains how to set up end user access to the Windows Azure Platform

The service management APIs provide programmatic access to most features available in the management portal. These are a set of REST-based calls that interact with the Windows Azure Fabric (the core of the cloud operating system) to perform various tasks across the range of Windows Azure services. Different wrappers have been written over the SM APIs in .NET, PowerShell, command line Azure tool, Azure Java  SDK and many CodePlex (open source) projects (e.g. http://azureservicesmanager.codeplex.com/). Read more on SM APIs here: https://msdn.microsoft.com/library/azure/ee460799.aspx

For this Windows Azure guide we shall design a simple console/Windows Forms- based application to perform scaling using SM APIs. 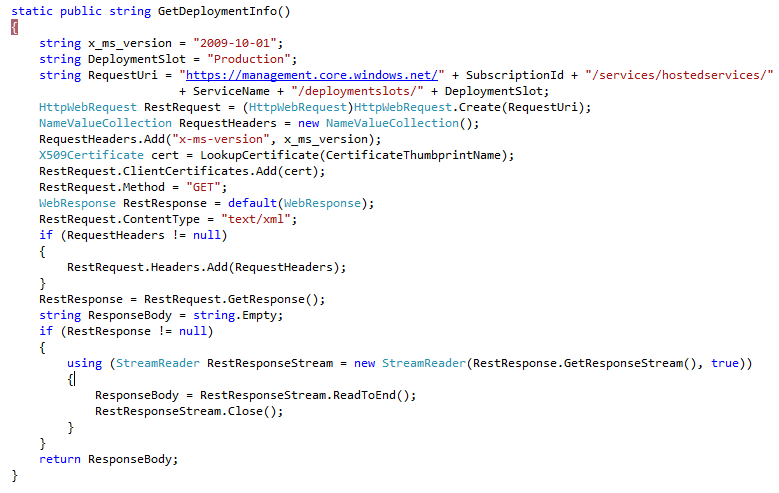 Get the service configuration file: