For this installment of the BackTrack 5 training guide, the lab setup is as follows: A virtual machine running on Windows 7, a BackTrack 5 instance in the VM, and a few Windows systems. Let us go through each step of the attack process as we attempt to penetrate this network.

Once connected to the network, the first step in this BackTrack 5 training guide is to sweep the network and check for live systems. To accomplish this, we use the tool AutoScan Network 1.5 on BackTrack 5. The path to this tool is as follows: 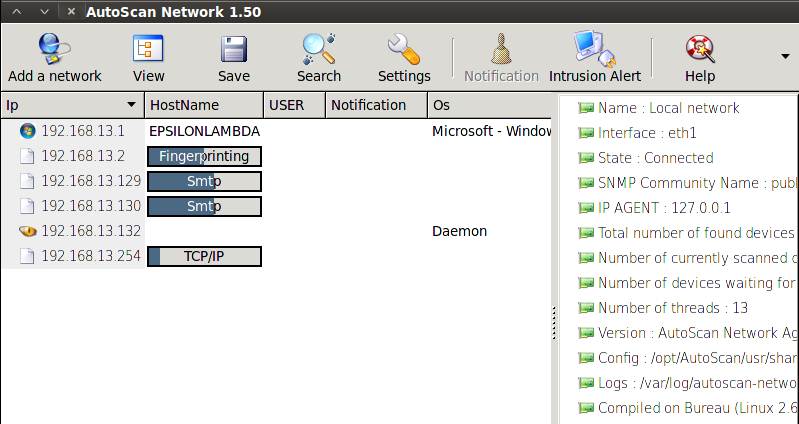 Figure 1 depicts the AutoScan Network in action. This tool provides various options for adding a range of IP addresses to scan. Once the scan is launched, it lists IP addresses and details such as hostname, users and operating systems running on the network. Figure 1 shows that SMTP, TCP/IP and fingerprinting scans happen automatically. This tool also helps in detecting intrusion alerts within the network. There is also an option to save a particular instance of the scan.

As explained in previous installments of this BackTrack 5 training guide, you can also use NMAP to check if the system is alive, for sweeping the network, banner grabbing, fingerprinting, and so on. Once the list of systems is obtained, we have a clear picture of the operating systems running, as well as the IPs that are live. Before launching an attack, we will perform vulnerability research on our target.

Suppose the target system is a Windows 2000 Server, which is running on 192.168.13.129.  Vulnerability databases can be checked for information, using tools such as Nessus or OpenVAS. However, for our BackTrack 5 training guide, we will perform vulnerability scans on the target manually.

The popular National Vulnerability Database at http://web.nvd.nist.gov/view/vuln/search provides information on various vulnerabilities of a particular system.

For our BackTrack 5 training guide, we will use the vulnerability in Windows 2000 Server’s RPC DCOM port that allows remote code execution, and leads to buffer overflow. In the Metasploit tutorial we have seen how to exploit the vulnerability of a target. We have spawned a meterpreter shell on the Windows 2000 Server i.e. 192.168.13.129, as shown in Figure 3. BackTrack 5 offers other privileges such as SET, which can be used to penetrate the system. 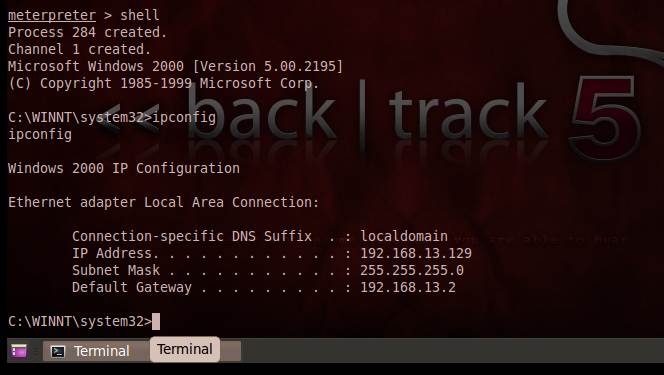 Once inside the system, several details about the system can be obtained. Following are a few of the important commands that can be executed:

The next part of this BackTrack 5 training guide covers clearing any traces of the attack in the target system. A simple clearev command clears the event logs in the system, leaving no trace of any unauthorized presence. Figure 4 shows clearev in action.

Windows maintains application logs, system logs and security logs. The screenshot in Figure 5 shows them in the target system. 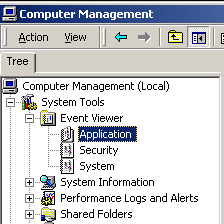 The clearev command clears the logs in these categories and leaves no traces of any penetration. Of course, an astute system administrator would immediately suspect something amiss on seeing the entire log entries cleared. It is thus advisable to set up backdoors and rootkits to maintain access for extended periods of time.

The Windows security model is pretty simple. Every user has a unique SID (security identifier). The SID is of the following form:

Subsequent to login, several processes are created on behalf of each user. Each process is assigned a token, defining the privileges accorded to the associated user. The SID forms part of the token.

In our Metasploit tutorial earlier, we used the steal_token command on meterpreter to change tokens for elevating and exchanging privileges with other user groups. The users we came across included ‘system’ and ‘administrator’.

Our BackTrack 5 training guide has discussed penetration into a system on the network from scratch. We started with network sweeping and gathering of information in the initial phase, and followed with vulnerability research using an online vulnerability database. We also performed an attack on the system, checked a few important commands in the post-exploitation section, and finally cleared any traces of our attack. We also briefly covered the Windows security model.