Some surprises as cloud tops hot primary storage projects for 2014 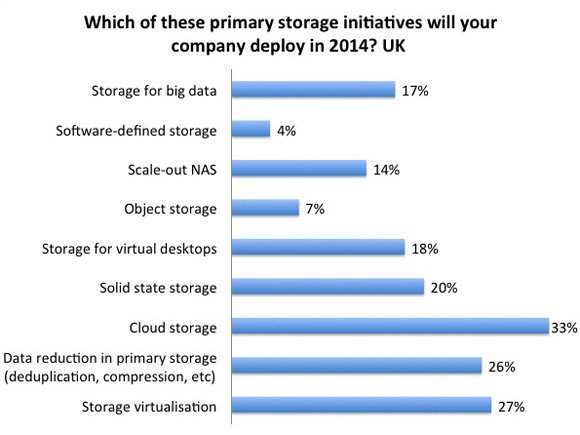 This slide provides a snapshot of what’s hot in projects for primary storage for IT departments in 2014. Some things seem to be in step with supplier hype. Namely, the leader here – cloud storage – which one third of respondents say will be among primary storage projects in 2014 and which seems to reflect growing confidence in the cloud. Storage virtualisation was the second most pressing storage priority for 27% of those questioned. Many respondents probably mean “storage for virtualisation”, and that would be in keeping with a wider IT landscape in which server virtualisation projects are still a top of the to-do list. Perhaps the biggest surprises are those projects that appear out of step with levels of supplier hype. Firstly, data deduplication for primary storage, which figures highly despite seeing little supplier hype, and flash solid state storage, which, although registering a healthy 20%, is quite far down the list in a period in which it is rarely out of the IT/storage news headlines.