This article can also be found in the Premium Editorial Download: Computer Weekly: A ‘stunning victory’ in Post Office Horizon trial

Subpostmasters suing the Post Office for the suffering they claim to have experienced as a result of computer system problems and an unfair contract have been vindicated by a High Court judgment.

In a ruling today (15 March 2019), Judge Fraser found there was a culture of secrecy and confidentiality generally in the Post Office, but particularly around the Horizon accounting and retail system subpostmasters use to run the branches.

Fraser issued significant judgments on the nature of the relational contract between subpostmasters and the Post Office. As a result, the Post Office will be bound by obligations to subpostmasters, which it had failed to offer in the past. These include good faith, fair dealing, transparency and cooperation.

The judge’s criticisms of the Post Office included “oppressive behaviour” when demanding sums of money that could not be accounted for by subpostmasters.

“There can be no excuse, in my judgment, for an entity such as the Post Office to mis-state, in such clearly expressed terms, in letters that threaten legal action, the extent of the contractual obligation upon a [subpostmaster] for losses. The only reason for doing so, in my judgment, must have been to lead the recipients to believe that they had absolutely no option but to pay the sums demanded. It is oppressive behaviour,” said the ruling.

“The Post Office describes itself on its own website as ‘the nation’s most trusted brand’. So far as these claimants, and the subject matter of this group litigation, are concerned, this might be thought to be wholly wishful thinking.”

The Post Office said it was considering appealing certain legal interpretations of its contract with subpostmasters.

A long journey to court

The case in the High Court is part of a group litigation order (GLO), through which more than 500 subpostmasters are suing the Post Office. It is not the final decision in the case, with at least three more trials set to be held, one of which is currently underway.

The first trial was held in November 2018 and focused on the contractual relationship between the Post Office and the subpostmasters who manage its local branches. The 300-page document containing the judgments and observations of Judge Fraser for the first trial was handed out in the High Court.

Outside court, Alan Bates, who formed pressure group Justice for Subpostmasters Alliance (JFSA), which ultimately forced the GLO, said: “This is a stunning victory for the claimant group and we couldn’t be happier. This has been the result of many years’ work to achieve justice for over 500 people. The case has exposed how the Post Office has mistreated people and highlighted a culture of secrecy around Horizon and Post Office practices.”

Bates, a former subpostmaster, has campaigned tirelessly to expose the potential for losses due to Horizon errors since 2000 when he discovered a shortfall of over £1,000 which he couldn’t account for. He was a subpostmaster at Craig-y-don Post Office in Wales from 1998 to 2003.

Patrick Green QC, representing the subpostmasters in the case, said: “This is incredible vindication for subpostmasters and a very important legal decision. This is the end of a very long road where they have tried to get a fairer contractual relationship.”

The plight of some subpostmasters was first reported in 2009, when Computer Weekly revealed that the lives of some subpostmasters were turned upside-down as a result of being fined, sacked, made bankrupt and even imprisoned because of unexplained accounting shortfalls. Some claimants were sent to prison, one while pregnant. They blame the accounting and retail system they use, known as Horizon, for the problems. The Post Office denies this.

Horizon, which was introduced in 1999/2000, is used by nearly 12,000 post office branches. Subpostmasters are held liable for any unexplained losses (see timeline below).

After the judgment was handed down, Jo Hamilton, one of the subpostmasters who first spoke to Computer Weekly in 2009, said: “I know it is not the end, but it is the beginning of the end. It feels amazing after all these years.”

Post Office chairman Tim Parker said that despite recent improvements, the judge’s comments were a forceful reminder to do better. “We have taken his criticisms on board and will take action throughout our organisation,” he said.

There will be at least four trials in the case. The second trial, which is focused on the Horizon computer system itself, has just completed its first week. A third trial, scheduled for October 2019, will focus on individual subpostmasters’ claims, and a fourth trial will probably be held in early 2020.

Parker said the Post Office would continue to defend the overall litigation. 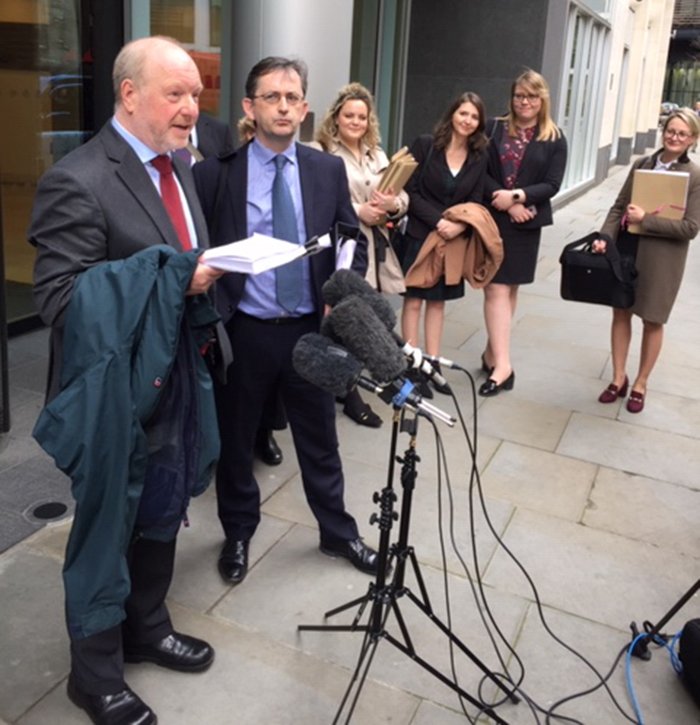 “This judgment from the first trial is long and detailed and we will take time to consider it fully. There are, however, areas around the interpretation of our contracts where the judge’s conclusions differ from what we expected from a legal standpoint and we are therefore seriously considering an appeal on certain legal interpretations,” he added.

During the first trial, there were revelations about the fallibilities of Horizon and how they are dealt with.

In preparation for the second trial, a document known as the known errors log was disclosed, revealing thousands of errors that the Post Office and Fujitsu knew about but did not inform the subpostmaster network.

One known error, which featured heavily on day one of the current trial, was first made public by Computer Weekly in November 2015. The issue, which has become known as the Dalmellington case, named after the branch affected, involved an incident in which thousands of pounds’ worth of payments were duplicated for one subpostmaster. If undetected, this would have appeared as a loss when the accounts were completed, which would be the responsibility of the subpostmaster.

Separately, the Criminal Courts Review Commission (CCRC) is reviewing about 30 claims from subpostmasters who say they were wrongfully prosecuted as a result of problems with the Post Office’s Horizon system.

May 2009: Bankruptcy, prosecution and disrupted livelihoods – postmasters tell their story

January 2013: Post Office wants to get to bottom of IT system allegations

June 2013: Investigation into Post Office accounting system to drill down on strongest cases

December 2014: Why MPs lost faith in the Post Office’s IT investigation, but vowed to fight on

February 2015: Post Office CIO will talk to any subpostmaster about IT problems, promises CEO

May 2015: IT system related to subpostmaster prosecutions under review by CCRC

November 2015: The union that represents Post Office subpostmasters has warned of a problem with the Horizon accounting system

November 2015: An email from Post Office IT support reveals a problem with the Horizon system and supporting processes that could lead to accounting errors

November 2016: The legal team hired by a group of subpostmasters will take their case to the next stage

January 2017: The group action against the Post Office that alleges subpostmasters have been wrongly punished for accounting errors gets a green light from the High Court of Justice

April 2017: Investigation into claims of miscarriages of justice in relation to a Post Office accounting system has appointed a forensic accountant firm

May 2017: Hundreds of subpostmasters have applied to join IT-related legal action since March

November 2017: An end is in sight for subpostmasters’ campaign against alleged wrongful prosecution, which they blame on a faulty computer system

April 2018: Criminal Cases Review Commission forensic examination of the IT system at the centre of a legal case against the Post Office has raised further questions

October 2018: After over a decade of controversy, next week marks the beginning of a court battle between subpostmasters and the Post Office

November 2018: High Court case in which subpostmasters are suing the Post Office has revealed a known problem with a computer system at the core of the dispute

November 2018: A High Court trial, where subpostmasters are suing the Post Office for damages caused by an allegedly faulty IT system, ends second week

November 2018: The High Court trial in which subpostmasters are suing the Post Office has reached an important stage

December 2018: CCRC may hold off subpostmaster decision until after Post Office Horizon trial

December 2018: Court case where subpostmasters are suing the Post Office set to span at least four trials and extend into 2020