The Exaro Insolvency Index, which tracks company failures across the UK, shows that 229 information and communication companies were going through insolvency in March compared with 170 in the same month a year before – up just over a third.

It is also higher than the figure for the previous month, which stood at 216.

The year-on-year rise comes against a backdrop of a 9% increase in companies that filed one or more insolvency notice in the UK economy as a whole.

Information and communication companies saw increases in three out of four types of insolvency last month, compared with March 2013.

As the graphic below shows, winding up petitions almost doubled from 16 to 29. Orders or resolutions to wind up increased by 41 per cent from 140 to 197, while appointments of liquidators rose by just under a third from 132 to 175.

The number of companies in the sector that entered administration or receivership in March remained unchanged on last year at seven.

In the quarter to March, administration and receiverships fell slightly to 26 from the 24 in the same period last year. The decrease is a sign that insolvencies for the sector may start to ease.

Alex Cadwallader, a director of Leonard Curtis, a company that specialises in corporate recovery and insolvency, said: “As is often the case, the market generally sees an increase in the number of insolvencies as the economy improves.

“Many stakeholders, such as banks and other investors owed money, have a tendency to hold their position during a recession. But as confidence in the market increases, they become increasingly willing to force the issue with their under-performing clients or businesses.” 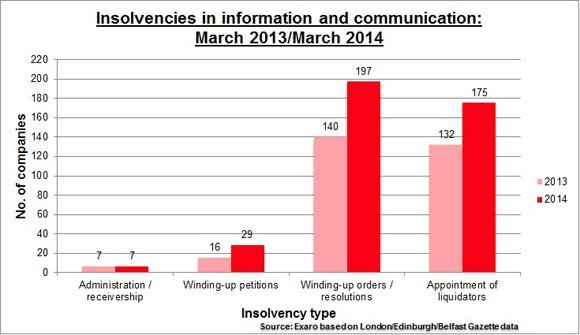 Lack of investment during the recession

“For the IT sector, and early-stage technology particularly, many are suffering the consequences of having been unable to attract the required level of investment while the UK economy has been in a recession.

“And, since investors generally only want to invest in the latest products, for those who have not committed the required resources to research and development during that time, the obstacles they face are all the greater.”

Companies that categorise themselves as developers of business or domestic software saw increases in three out of four types of insolvency in March compared with the same month last year.

Winding-up petitions rose from 10 to 16. Orders or resolutions to wind up increased from one to three, while appointments of liquidators went up from nine to 16.

Only one software developer went into administration or receivership last month, the same as in March 2013.

In March, 25 software developers filed one or more insolvency notices, up from 13 for the same month in 2013.

The company developed technology for “smart meters” and the transfer of meter readings. This evolved into providing a range of services to help make card payments online.

The administrators say £13 million has been invested in the company’s products and systems. The company entered administration after failing to raise additional capital.

Cadwallader said the administrators were seeking to sell the core business and assets of the company, as well as its “impressive patent portfolio”.

The insolvency gloom for information and communication companies has worsened since last month’s set of figures.

IT consultancies also feature prominently in the data for a second month as they continue to see increasing numbers of companies fail.