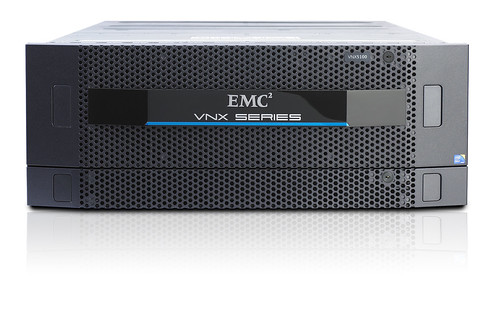 EMC’s new VNX 5100 (pictured), a block-only storage device, won’t go on sale in Australia because “We did not see great enough demand to see that particular system,” according to Mark Oakey, the company’s Marketing Manager for Storage Platforms in Australia and New Zealand.

“We’ll continue with the Clariion CX4 120,” he told SearchStorage ANZ. “It has more or less the same capabilities.”

“We’ve been strong at the high end with Symmetrix,” he said. “This [the VNX range] is extending our reach and addressable market opportunity. That’s where the growth is coming from according to analysts. This launch gives our channel the chance to meet high growth opportunities.”

One, the Global Deduplication Array, is said to be seven times faster than its predecessors. The array uses two of the new DD890 controllers, and the company has also introduced a slightly smaller DD860 controller. The former can handle 14.7 terabytes an hour, the latter a mere 9.8. The DD860 also makes an appearance in the new “Data Domain Archiver,” an appliance said to be suited to both backup and archiving.

The company also re-announced a slew of previously-revealed upgrades to its Symmetrix VMAX product, emphasising an already-released revision to its Enginuity and FAST software.

Reaction to the VNX launch has, to date, been muted. EMC bloggers are pushing the new range as terribly significant, NetApp is rebutting it with about as much enthusiasm as one would expect.

Independent commentators seem, at this point, to be less-than-enthusiastic.

“I see this release from EMC as fundamentally a hardware refresh, to replace the processor, memory and disk shelves (from FC-AL to SAS); much the same as what NetApp did with their FAS32xx and FAS62xx launch,” said Ben Di Qual, a virtualisation Solutions Specialist at Data#3, a partner for IBM, HP and NetApp, said

“EMC are, at the same time, using this opportunity to try and change their messaging on the mid-enterprise product range and remove any customer confusion about Celerra/Clariion and which platform to use. Even though there is no functionality or high level architectural difference between Celerra/Clariion and VNX (still FLARE and DART) the single product name will assist EMC to sell the ‘unified storage’ messaging they are so keen to get out there.”

“This is critical presently as competition is really heating up in the mid-enterprise space with IBM v7000 and 3par/HP getting a lot of interest and NetApp gaining more and more market share. If mimicry is a form of flattery EMC are paying NetApp a huge compliment by trying to mirror their messaging, even if their offering isn't really there yet. If they can change some customers perception with this messaging they have succeeded.”

The Recovery Monkey blog takes issue with EMC’s use of the “unified” moniker, in a long list of questions the author feels need to be answered about the device.