Cyber security in the Middle East

As organisations increase their reliance on IT through rapid digital transformations, the threat of cyber attack grows. It is not just western countries such as the US and the UK that are being targeted by hackers, as the rapidly developed and wealthy nations of the Middle East become targets of both politically and financially driven attacks. For example, the Saudi Arabia state media confirmed that attacks on several Saudi Arabia government agencies, involving the use of a new variant of Shamoon known as StoneDrill, which destroys everything on the infected computer, happened over a two-week period late last year. Read more about it in this e-guide. There is a lot at stake in the Middle East. For example, banks in the region are moving to digital services and the threat of disruption caused by hackers is increasing as a result. The Middle East is increasingly seeing the use of IT to support the everyday lives of its citizens, with autonomous vehicles and passenger-carrying drones, which you can read more about in this issue, being introduced. These could become targets of cyber criminals and terrorists intent on causing maximum damage. The adoption of internet of things technology is another trend that is potentially opening doors for those with malicious intent. Read in this issue how to keep those doors locked. In this e-guide, discover how cyber security expertise can help businesses in the Middle East navigate digital transformations and keep cyber criminals at bay. 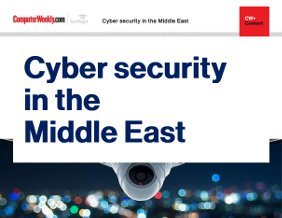