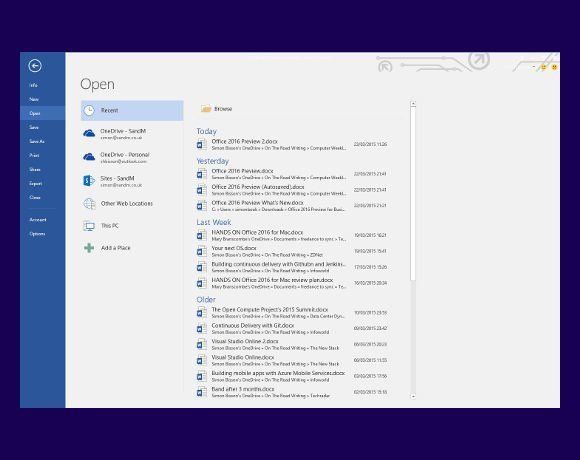 While much of the Office user interface has not changed since Office 2013, Microsoft has done a lot to fine tune its Backstage File menu replacement.

Instead of a list of files, Microsoft has updated its Recent file view to show more information about when files were last edited, as well as making the option of browsing for files more obvious.

One feature that has yet to make it to the Windows Office 2016 release is the ability to see files in shared OneDrive folders, a useful new feature that is already in the Office 2016 Mac beta – though shared folders do continue to show in the recent folders views.

One application that has had a UI change is OneNote, which becomes more like its Windows Store equivalent. That is not surprising, as it is a common look-and-feel across Windows, MacOS, Android and iOS – all using OneDrive as a hub to store and share files. Giving OneNote a standard design is an important part of making it more a service than an application, especially if it is to compete with Evernote.

Using OneDrive to store, share, and collaborate is a key element of the standalone OneNote offering, and while it is still clearly part of Office, it is also quite clearly beginning to go its own way.