Projects more than 25% of respondents are doing 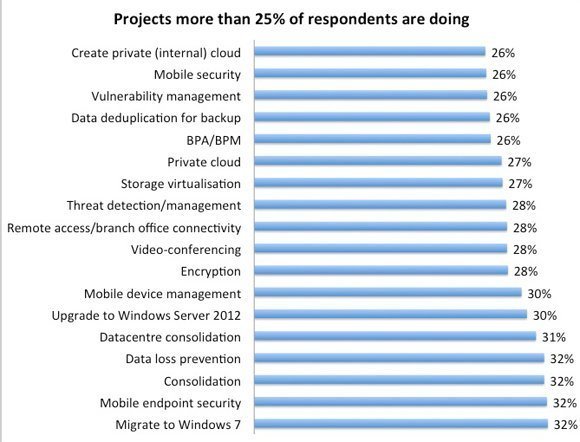 Source:  Projects more than 25% of respondents are doing

Windows migrations feature high up the list of priority projects for organisations in 2014, following Microsoft’s decision to end support for Windows XP by April this year.

Some 42% of UK organisations (31% across Europe) plan to migrate to Windows 7 during the next 12 months. Windows 8, however, which is less mature for business applications, is less popular.

This year is likely to be the last big Windows migration as more organisations move their desktops to cloud-based services, which can be run on any operating system.

“People will use a much wider variety of tools to access desktop services,” said Illsley.

IT Security projects feature prominently in the list of priority projects in 2014. Mobile end point security, data loss protection, encryption and threat detection  are among the most popular projects planned this year.

“Data leakage is a killer for businesses and CEOs know it. Every organisation must have technical safeguards and formal HR/IT policies in place that protect business information,”  Phil Barnett, UK sales director for Good Technology told Computer Weekly.