A more beautiful web? Plenty to look at, plenty to download 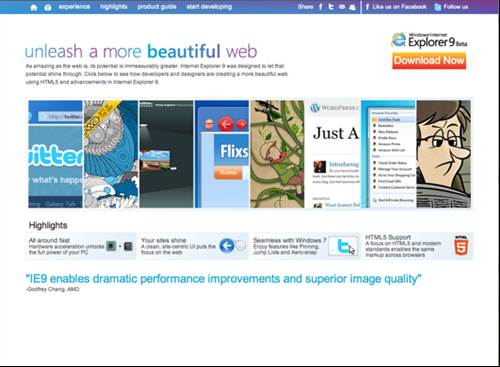 A more beautiful web? Plenty to look at, plenty to download

Possibly taking its lead from Apple's OS X 'Downloads' function, IE9 now features a Download Manager summary pane, which keeps a running list of the files a user downloads from the web. Attempting to push the functionality quotient one level further, Microsoft has built in a security function to inform a user if a file download is likely to be malicious -- a feature that the company openly describes as a "unique reputation checking element" of its browser, in the face of all other competition. So if Microsoft's data banks know that a particular download has been reported as malware, then it will be flagged even if it appears to pass virus checks. Again imitating Apple's Leopard and Snow Leopard, the Download Manager also allows the user to pause and restart a download, which is especially useful when working on a slow Internet connection.

After almost exactly two years, Microsoft is finally ready to move to the next version of its web browser with Internet Explorer 9 progressing from public beta to its full-blown release candidate. Promising streamlined design, fewer dialogue boxes to click through and more intuitive navigation, IE9 is distinguished by the fact that it is not tied to any major iteration of the Windows operating system. In terms of system requirements IE9 demands Windows Vista 32-bit with Service Pack 2 (SP2) or higher - or Windows 7. It also requires 512 MB of memory and 70 MB of hard drive space for a successful 32-bit installation.
View All Photo Stories
SearchCIO
SearchSecurity
SearchNetworking
SearchDataCenter
SearchDataManagement
Close