The Metropolitan Police Service (MPS) has released a three to four-year plan on how to transform the use of technology within the organisation.

The Total Technology IT strategy calls for an agile, flexible and responsive set of technologies to support a modern police service.

The strategy was due to be published in April 2013, as the culmination of a 100-day plan to transform the Met’s IT to rectify a “compelling and critical” need for change in the way the force delivers technology, but it faced a nine-month delay.

An internal investigation by consultancy Deloitte, completed in October 2012, warned that if the Met did not complete the 100-day plan – including the delivery of the new strategy – it would risk “underachieving and, at worst, could have a destabilising impact” on policing.

*Taken from the Total Technology report

The Total Technology review states that citizens will be able to interact with the Met “in a variety of new ways using fast and flexible online services 24 hours per day”.

“The revolution in consumer technologies and the move towards open government are driving police services to deliver to the citizen in new and innovative ways,” said the report.

Users now expect more flexible ways to interact with the Met. More than five million 999 and 101 calls are made and 700,000 crimes reported to the MPS per year, and the report states officers need new technologies to support call handling, investigations, intelligence services and offender management.

But the report identifies that the MPS needs to also offer online channels to meet the demands of citizens who may fall into the digital divide.

Officers on the street will also be equipped with “cutting-edge technology”, including introducing tablet-style device to 15,000 front-line officers. The current technology used by the Met is not well suited to online and mobile, with many of its supporting systems designed in the 1980s and 1990s. Mobile technology will reduce travelling time to and from police buildings, and therefore increase time for policing.

MPS commissioner, Sir Bernard Hogan-Howe, said: “ We are going to use technology to stop crime, arrest offenders or help victims. We need to keep police officers out of police stations and reduce bureaucracy. Digital policing will help us to do this."

“We aim to be at the forefront of innovation, making best use of our technical resources rather than building on outdated technology,” stated the Total Technology report.

The Met plans to implement a number of new technologies for officers, including an MPS Apps Store for officers to access publicly available applications, an electronic statement for crime numbers via mobile to be handed to victims at the scene of a crime, equipment to capture evidence digitally, and access to information and forms via mobile devices.

Citizens will also be introduced to a set of new online services for crime reporting, crime tracking, payments, and uploading digital images and videos. The Met also plans to enhance its website to make it easier for citizens to find and use services.

Richard Thwaite, Chief Information Officer for the Met, said: “Our new agile ways of working will allow for shorter delivery lead times, whilst more flexible contracts with a tougher governance approach will ensure the technology we buy is “roadworthy” and stays fit for purpose in the years ahead.” 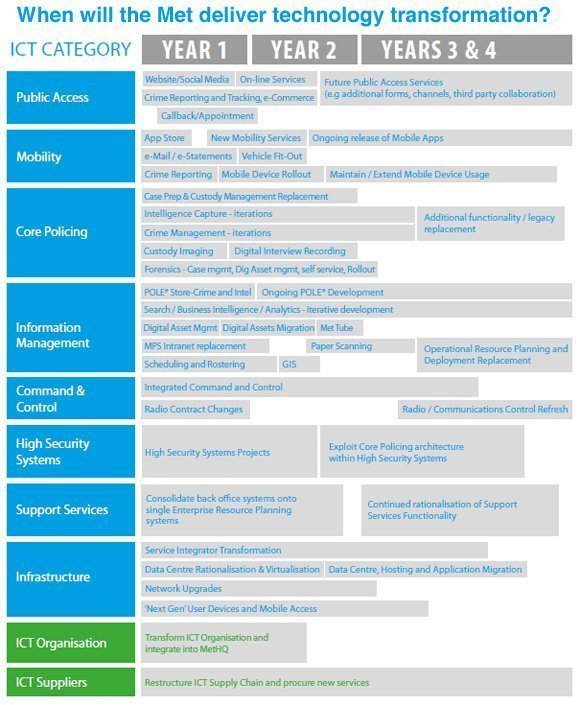 From an infrastructure perspective, the Met wishes to make use of cloud services where appropriate, virtualise its hardware to reduce space requirements, save energy and improve system manageability, upgrade networks, and rationalise its use of datacentres.

The Technology Investment Board (TIB) is the key governance body which will oversee the delivery of the Total Technology programme. The TIB:

*Taken from the Total Technology report

But reductions in budgets combined with increased performance expectations will have an effect on how the Met goes forward with its new approach to IT. The MPS must deliver overall savings of 20% – around £500m – which equates to savings of £60m from its technology budget by 2015/2016. The new IT strategy will see investment of £200m over the next three years, and will cut ongoing IT costs by 30% allowing the Met to meet their savings target.

The report states that the Met’s back office is inefficient, so overhauling this would lead to direct technology savings and also contribute to technology change which will enable overall savings for the organisation.

The Met’s current outsourced IT contracts are due to expire in the coming years, so the organisation has looked externally to experiences from other public and private sector bodies for ideas surrounding new ways of procuring technologies.

In particular it has looked at the government’s move towards smaller IT suppliers on shorter contracts which provide more flexibility and agility, while allowing innovation and speeding up time to market.

The Met also wishes to go down this route to encourage more competition in the market and to be able to control costs. It plans to reduce its contracting time through the use of procurement frameworks used by government, including G-Cloud and Sprint 2.

The strategy states the Met requires an agile and flexible set of technologies to “exploit new and exciting trends that can bring the maximum business benefit at the most affordable cost”. 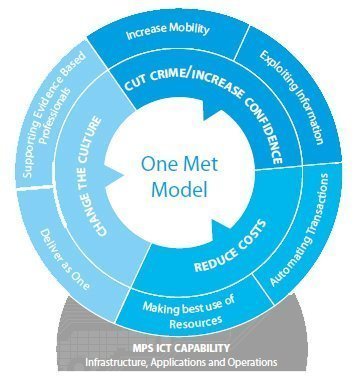 The MPS has chosen a tower-model approach for its IT, which involves breaking down the common software components into building blocks and implementing a service integrator to oversee this layered structure.

The towers will include network communications (including telephony), datacentres and hosting, end user computing, and applications. There will also be a number of limited cross-tower systems, one of which will be the command and control centre.

Benefits of this model include business alignment, cost-effectiveness, re-use of standard products, transparency, collaboration and future-proofing.