CERN, the home of the Large Hadron Collider, is using IT service management (ITSM) to support operations outside the IT function.

"ITIL is not just for IT," he says. "There is nothing equivalent to ITIL outside of IT."

Martens has spearheaded the application of IT service management to facilities management following the appointment of a new CERN director general.

Previously, CERN used various tools, including Filemaker, SharePoint and a custom version of Remedy that was not aligned with the Information Technology Infrastructure Library (ITIL).

Creating a catalogue of business services

"The idea started while I was establishing ITSM best practices. It took half a year to convince peers to consider the use of IT service management [in facilities management]. We started with a service catalogue describing the services available," he says.

Martens developed a business service catalogue, which provided an inventory of services to customers: "It is similar to an IT service desk, inspired by ITIL, but had an SLA on cleaning, whereby a user could ask, 'If my bin is full, can you empty it?'." The service desk applies the same concepts as an IT support desk. 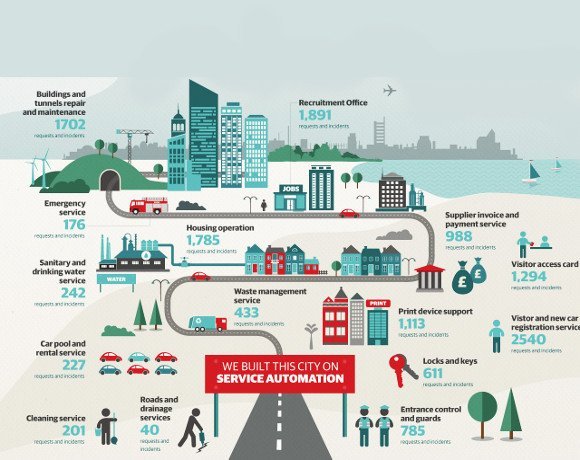 In 2010, the team at CERN integrated some of the IT functions into the service desk. This required some extra work due to the way IT described service.

"Oracle is not a service, it is a function," says Martens. "IT had to change from a functional point of view to a customer point of view. If we change Oracle to MySQL, the database service is not changed to the customer. This is analogous to offering a car service – you want a car service, and you can have a BMW or a Fiat."

1. The team positioned its effort as enabling the support organisation to streamline support efforts and touted the benefits of better service levels and transparent reporting on the service quality to the CERN user population.

2. The service management team ignored past failures and selected an ITIL Lite approach, which implements key components of ITIL v3 to ensure a sound basis either as a starting point for full implementation or as a deliverable for those not wishing to fully implement ITIL v3.

3. Employees who had already dealt with issue tracking had to be convinced that a generic issue tracking system for all was feasible and that they could abandon the tools configured for their specific needs. Groups with more traditional organisational structures had to be convinced of the usefulness of a service desk system and the fact that it could be applied to non-IT environments.

4. By identifying a common use case for the creation of overall reports on service delivery and service quality, the different teams agreed to leverage a unified tool.

5. A market survey of many alternative products was generated, where tools were ranked according to more than 300 specific criteria. The highest-ranking suppliers were invited to presentations and proof-of-concept sessions and then ranked on technical and commercial criteria. ServiceNow was selected as the service management tool of choice.

This is an extract from the Forrester 2011 report "At CERN, half of the world's particle physicists experience service management", by Evelyn Hubbert.

By February 2011, CERN's service catalogue for facilities management comprised 300 items. It went live with a helpdesk portal based on ServiceNow, the software as a service (SaaS) IT service management tool, which provides one point of contact for people at CERN.

According to Martens, ServiceNow provides a unified process for handling facilities management helpdesk requests. The CERN Service Portal provides an interactive interface that allows employees and visiting scientists to request services from facilities management. The services covered include office and laboratory infrastructure; safety services, including medical services and the fire brigade; and computing infrastructure.

Having a wide scope at CERN's service desk meant that the call centre staff could not be experts –  they became dispatchers. He says the service catalogue for facilities management allows call centre staff to identify the right function: "It is pretty successful – we don't have a lot of tickets jumping around [to different departments]."

These changes to facilities management have required a flexible approach to building the service desk. "We talked to everybody and ended up looking at business services," says Martens.

The approach he took allowed CERN to document the business processes associated with facilities management. "When we went live, we discovered that sometimes the manager didn't know what was happening within the business service," he says.

Martens admits that it was difficult to define service owner roles and people fell back into old practices: "It is still work in progress. We have to invest more in coaching and training."

But he believes the switch to a service management model for facilities management has been a success, and the team now understands the processes in facility management and IT.

According to Martens, organisations are becoming more keen to understand how to use ITSM outside of IT. However, CERN does not yet have any plans to drive the standards body to broaden to cover non-IT operations management.